The Union of Independent Republics had its own corps of Officers during the Pendulum Wars which were created to oversee logistics and train the foot soldiers of the Independent Alliance. They weren't part of the special forces unlike the UIR Elite, and were considered to be part of the wider UIR Army. It is unknown if the Navy and the Air Force had its own counterparts.

UIR Officers were present throughout the Pendulum Wars, they were largely in charge of administrative duties in regards to knowing the name, place and current operation of an Indies soldier. As such, they were usually in the back lines overseeing the logistics of the men and women under his/hers' duty. Nevertheless, when push come to shove, they are known to lead their men into combat as a senior in the chain-of-command.

One UIR Officer, was Girek C. Toly who rose to the rank of Major in the twilight days of the Pendulum Wars. Toly was present during the Siege of Anvil Gate, but was tricked by Victor Hoffman, causing the Siege to fail[1]. Later, during the Mutiny at OZP-11, Toly was one of the Officers in charge of maintaining the defense against Garron Paduk's forces. There he met his end after trying to fend off from the mutineers[2].

UIR Officers wore completely different armor than those worn by conventional UIR Infantry. Their armor was slimmer and more streamline than usual, while each Officer wore a short cape. It also has gold decals and accents, possibly to highlight their seniority. A Commando Knife is shown, but it is unknown if it was considered standard equipment.

Due to their senior rank, Officers are experienced soldiers proficient in most UIR weapons and vehicles, despite the stereotype of Officer being placed on a desk job. While not on the same scale as the UIR Elite, Officers are still an opponent that any Gear should not underestimate. 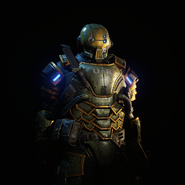 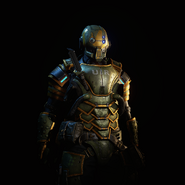