The Union of Independent Republics Infantry, otherwise colloquially known to the COG as Indies was the main counterpart to the Coalition of Ordered Governments' Gears. The UIR also had its own counterpart to the Onyx Guard called the UIR Elite. They use the same equipment as the COG Gears, however due to the nature of the UIR many infantry formations consist of different models and types of armor. This can lead to UIR infantry looking contrastingly different to other UIR infantry groups.

The Kashkur Front was one of the many theaters of the Pendulum Wars. By the 67th year of the war, COG forces raged a bloody front against the Indie army. The international media ignored the Kashkur front until the Vasgari government collapsed and allowed the UIR to invade and occupy the nation. Letting Furlin troops invade Kashkur from the southwest and hitting the city of Shavad. While the Fifteenth Furlin Cavalry attacked Anvil Gate.

The Battle of Shavad was a major event of the Kashkuri front in the Pendulum Wars. After the UIR was able to occupy Vasgar, the Furlin third Infantry was able to hit the Kashkuri city. COG command scrabbled all available troops to the city to enforce the local Kashkuri troops. Colonel Choi led the 6th Brigade on the north side of the city. While Captain Adam Fenix, led Howerd Company inside the city fighting Indie troops leading to the Gorlian Square museum to take out a spotter that was able to give precision locations of COG forces inside the city.

For years the western Kashkuri front was a bloody theater of the Pendulum Wars. The southern border with Vasgar was peaceful since Vasgar was neutral in the war, that relied on both the COG and UIR for its fuel. Vasgar faced a budget issues over payment of its Imulsion bills with the UIR, the failure of balancing the budget lead to the vote of no confidence against President Ilim of Vasgar by the Unity Party. The UIR would send peacekeepers to the nation and invade Kashkuri from two fronts, one attacking the Anvegad pass and the other at Shavad. Kashkuri troops were able to evacuate the civilians’ population. The 26th RTI was sent into the city to reinforce their Kashkuri troops.

Howerd Company under the command of Captain Fenix and Lt. Stroud unit was inside the back of the river. Cpt. Fenix requesting casevac for the wounded in his company but was reminded by Control that his unit is not the only one taking heavy causalities. Control advised him that enemy ground fire took down five Terns helicopters during extractions. Control told them that if they took out the Indies inside the city areas, they might be able to send a Tern to extract his Gears. With is new set up orders, Fenix advanced into the city, it took him thirty-minutes to advance due to enemy fire and random shelling. By the time Fenix reached the river, he made contact with Helena who thinks that the Indie setup an observer in the museum on Gorlian square. Lt. Helena theorizes that the Indie had an observer team and a sniper inside the museum. Fenix along with Helena came up with a plan of entering the 3rd story of the museum using a latter, speed, and smoke grenades. Task with taking out an unknown spotter and losing at least 26 Gears of his 90 men company, Fenix needed evac for his Tango-One and Tango-Twos. Fenix observed the museum for a few minutes until he seen sniper fire, giving proof that the Indie had troops inside the museum, Fenix then ordered Green FDC for fire support on the roof of the museum.

Was task with taking out a spotter inside the museum in Gorlian Square. Captain Fenix was advancing along the banks of the river in Shavad city. Noticing that three of the four bridges were impassible but the four was not collapsing from tank fire, while Indie troops were moving over a pedestrian bridge five kilometers west. Stroud discovers the Indie observer inside the museum in Gorlian square.

6 Brigade under Colonel Choi lead Coalition forces against a massive amount of Indie tanks, artillery, and missiles attacking the Shavad defenses line. Col. Choi defense would rely on the holding of the bridges inside the city; he tasked the Sherrith tanks with taking out the last bridge in the city. Though they were unable to destroy the bridge and the Indie army was able to advance into northeast of the city and nearly cutting off Howerd Company inside city.

Indie troops attacked the main tribe defenses via an amphibious landing, overwhelming the tribal forces with their superior technology. They reached the home village of Tai Kaliso, and wiped out everyone there, maiming many of the bodies. While the main battle went on, Indie squads in the jungle were attacked by Tai, who used gurillia tactics to kill entire squads. He continued to do so after discovering the destruction of his village, and the Indie forces were eventually driven from the island by the 26th Royal Tyran Infantry.

The Sarfuth-Maranday border Incident was a cross raid from neutral Maranday. Indie troops began using Maranday to attack Imulsion pipelines in Sarfuth, then retreat back into the neutral nation. During this incident, Pvt. Carlos Santiago killed an Indie saboteur who had placed an explosive device on one of the Imulsion pipelines.

C Company of the of 26th Royal Tyran infantry lands north of Aspho Point under a diversion attack from Coalition naval forces, so as to block off UIR forces from reinforcing Aspho Point. But COG intelligence failed to see that the two UIR regiments bases are reinforced with mobile artillery and armored cavalry. At this point the commando team finds out that the UIR has a backup of the Hammer data in another location; the Coalition carrier Merit sends two Petrel fighter-bombers to deal with the backup, but they are both shot down by UIR AA and Asp armored cavalry units. C Company under control of Major Helena Stroud, Sgt. Daniel Kennen, and Sgt. Bernadette Mataki are ordered to attack the advancing UIR forces with long range Longspear RPG's, destroying several gun placements and taking out some anti-air. The battle seems to have been won for the COG forces, but heavier UIR forces stay out of range past the bridge, and began inflicting heavy causalities on C Company, which was quickly running out of Longspears. Within a few seconds C Company lost 20 Gears and Kennen. In the confusion, Marcus and Carlos charge UIR forces with their Longspears and take out several artillery units. Major Stroud at the same time attacks one of the UIR armored cavalry units and manages to throw grenades inside; however, her webbing snags on the Asp's chassis and she is stuck, unable to get away. The Asp is taken out, but at the cost of Major Stroud's life. However, one Asp still remains and will oppose any COG effort to evacuate the many C Company wounded via air. Marcus and Carlos took a few men to ambush the Asp, but the ambush fails. Carlos forgets to stay in cover and leads a final charge on the damaged Asp. The two other Gears with them follow him, but all three are shot; the other two Gears are killed immediately, but Carlos survives and pretends not to be wounded so that Marcus would not risk his life rescuing him. Marcus at this point commandeers the Asp and uses it to knock out the remaining UIR anti-air and covers the withdrawing commando team from Khimera attack helicopters. At this point, the battle is mostly over, with the Hammer of Dawn data safely in COG hands and with C Company free to withdraw. However, Carlos is now seriously wounded in the top of his leg and in his abdomen and is on the bridge, begging Marcus and Mataki to leave him as he is probably too badly wounded to save. As Marcus prepares to make a rush for Carlos, a mortar round wounds Carlos again. Mataki prepares to shoot Carlos to put him out of his suffering, but Marcus is still intent on saving him; at the last moment, Carlos manages to commit suicide by fragging himself rather than risk the lives of his fellow Gears.

End of the WarEdit

While in Furlin, Indie troops battled in Ghato City and around several cliffs. After the Hammer of Dawn strikes on the Indie fleet, Premier Yori Deschenko entered into negotiations with the COG and the UIR surrendered. Despite this, some UIR units continued to fight, believing the surrender was COG propaganda, while the Gorasni would continue a guerrilla war.

The UIR infantry share similar equipment as COG forces. Both forces use the Pendulum Wars era Lancers as their primary weapons and UIR armor is comparable to COG equivalents in terms of defensive capabilities.[5] However, they do have their own assault rifles, one is a belt-fed system for ammo supply[1][3] and the Markza Mk 1 Marksman Rifle.[7] For sidearms, they have a model similar to Snub Pistol with a sleeker design.[1] UIR infantry also used sniper rifles for long-range attacks. In Gears of War: Aspho Fields, they are known to employ mortars in warfare, which is further depicted in Gears of War: Promise Me. 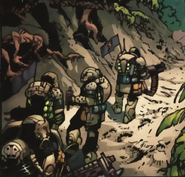 A group of UIR soldiers 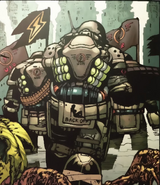 UIR armor from behind
Add a photo to this gallery

Retrieved from "https://gearsofwar.fandom.com/wiki/UIR_Infantry?oldid=156116"
Community content is available under CC-BY-SA unless otherwise noted.