Gears of War Wiki
Register
Don't have an account?
Sign In
Advertisement
in: Weapons, Armor, Technology,
and 2 more

UIR Armor was body armor worn by soldiers of the Union of Independent Republics Infantry. It served as the UIR counterpart to COG Armor, and despite functional similarities, had a significantly different design.

The UIR infantry is equipped with various types of armor. UIR armor types often define the region of Battalions or Regiments of Indies.

The most common type of armor in the UIR is the Standard issue green armor or more formally known as the Regulator Armor. It has "UIR" stamped on the right side of the semi-conical chest plate, and the Emblem of the UIR is found on the left bicep, and back pack sections of the armor.

Unlike COG Armor, UIR Armor is held together by a central semi-conical chest plate, whilst flexibility and mobility is granted through segmented armored plate pieces. Shoulder and leg pieces appears to be far more pronounced and bulkier than their COG counterparts, possibly assuring better protection in that specific body area.

Some variants include a clip-on point for the Standard Issue UIR combat knife, this is most likely reserved for squad leaders. The back packs of the armor serves as an ammunition pouch for the belt-fed rifle used by the infantry.

The back of standard UIR Armor

Armor worn by Officers of the UIR. Unlike the armor worn by the UIR Infantry or the UIR Elite, Officers wore a completely different armor set piece. The biggest difference is the fact that the armor is much slimmer than normal. Whether this means that the armor sacrifices protection for mobility or is made from superior but lighter materials is unknown.

What is known is that the Armor comes with a small cape, along with golden decals and accents to denote the Officer's superior position among his/her's underlings. A Combat Knife is equipped on the chest area of the Officer.

Details-wise, the chest piece was further segmented - resembling scales - which offers greater flexibility and the shoulder piece resembles more in line with segmented plates to provide increase mobility. Gauntlets and leggings are also more streamline and form fitting, which also enhances flexibility and weight. As such, the armor piece greatly resembles the one found in Gears Tactics, although whether this is actually Officer Armor is unconfirmed.

UIR infantry armour worn by the UIR Sandswept unit, this armour has been modified for desert combat and harsh terrain survival. The armour has desert camouflage painted over portions of it, the overall armour is lighter and has less armour platting then the standard issue UIR armour, giving the soldier better mobility while wearing it.

A brown poncho is worn around their necks and drops down along the back of the armour to give additional protection from the desert sand. Additional features on the armour include various Markza ammo and survival pouches attached to the belt and left thigh.

The Sandswepts unit patch can be seen sown onto the right shoulder fabric, with the standard UIR arm band being present on the left arm.

A rare and uncommon variant of UIR Armor was worn by elite soldiers. While structurally identical to standard armor, the elite armor was painted navy blue with white markings.

The "UIR" stamp on the chest plate was replaced by a white emblem of a skull combined with the UIR lightning bolt.

This is to signify the Elite's status as well as a non-verbal marking from both friendly Indie forces and opposing Gears. The emblem could also be found on the left shoulder piece of the armor.

The armor is the UIR counterpart to the COG's Onyx Armor.

An entire locker room filled with these space suits was found in OZP-11 at the Cosmonaut Training Facility. These suits were noted by Del to be incredibly advanced for the era of the Pendulum Wars.

UIR space suits were white and grey in color, bulkier than the normal armor worn by UIR Infantry due to the presence of oxygen tanks and other survival systems meant for space travel. The helmets, leg and arm pieces are detached and no full suit was seen fully assembled.

The helmet of the space suits is a conventional EVA helmet whose golden visor helps filter out the harmful rays of Sera's Sun. The "UIR" stamp is pressed on the front of the visor.

Apposed to the rounded helmet of the COG with the two eye-pieces side-by-side, The UIR Regulator Helmet features a more Skull-like appearance with a large eye-piece on the right, and two smaller eye-pieces mounted vertically on the left, however there are different variants.

The Helmet is also connected to the rest of the armor by ribbed tubing, the tubing maybe oxygen respirators in toxic environments.

The UIR lightning bolt is painted on the front on the helmet. 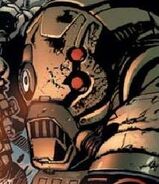 Helmet during the Pendulum Wars.

UIR Armor was first depicted in Gears of War comics, with its helmet design being the most prominent detail that differentiated it from COG Armor. It first appeared in a game with Gears of War: Judgment, in which a set minus the helmet was worn by Garron Paduk.[2] Gears of War 4 not only debuted a version with a helmet, but also UIR Elite Armor.[3]