Gears of War Wiki
Register
Don't have an account?
Sign In
Advertisement
in: Articles that need Gearsify-ing, Stubs, Weapons,
and 2 more

"Tripwire Crossbow! Never seen one of these. Doesn't this look kinda like a toy."
—Augustus Cole

The Tripwire Crossbow is the COG counter-weapon of the Locust Torque Bow. It fires an explosive charge-equipped bolt that sticks to surfaces and emits an infrared "tripwire" beam. Once the beam is crossed, the bolt will launch the explosive charge at the enemy, detonating.

This heavy crossbow is capable of launching a high caliber bolt that will firmly lodge itself into whatever it hits – even a concrete or metal surface – turning the area into a deadly trap. Impacted bolts send out an infrared tripwire, and launch a small explosive charge at the first enemy to cross the path of the beam. This weapon usually appears when you have to defend a position and place traps for the enemy.

Although the Tripwire Crossbow is a heavy weapon, it does not encumber the player like a Mulcher would, and roadie running, mantling and rolling can still be performed. 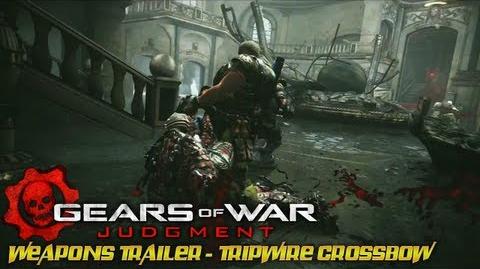