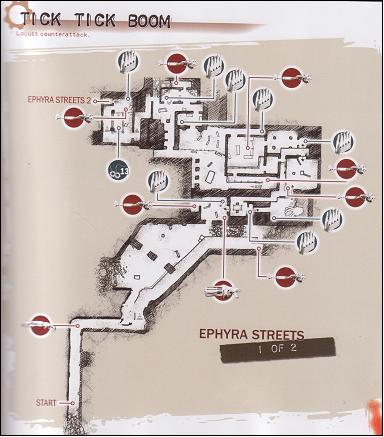 Tick Tick Boom is the first part of Act 2: Nightfall, and it sees the player first encounter the Boomer and the Boomshot as a wieldable weapon. It is also the location of the thirteenth COG Tag in the game. In this part, the player once again can choose one of two paths to take. The left path - the low route, or the right path - the high. It is recommended that inexperienced players take the Right path, as they do not then come into direct contact with the first Boomers of the game.

This part has a notable difference to Act 1 with the battles becoming more intense and exhilarating with the added threat of the Boomer, and the unexpected appearances of the occasional Sniper.

Lt. Stroud (COM): "Marcus, this is Anya. Hammer of Dawn is offline."

Lt. Stroud (COM): "The Imulsion factory is ten clicks ahead. But be advised, you’ve got enemy units moving to your location. They definitely know where you are."

Marcus Fenix: "Dom and I will go left. You two take right."

Marcus Fenix: "Baird and I will go left. You two take right."

Augustus Cole: "Sounds good. You been out here before, huh?"

Marcus Fenix: "Dom, we’re blocked. See if you can find another way into the building."

Damon Baird: "Damn. These guys are almost as big as you, Cole."

Damon Baird: "Yeah. It’s gonna wait. Save us for later. Like a snack."

Dominic Santiago: "Like two assholes on their first date."

Augustus Cole: "Which one of you freaks is next?"

Marcus Fenix: "I could use a hand here."

Augustus Cole: "We gotta get out of here. Now if you’ve got a plan, let’s hear it."

Dominic Santiago: "I know somebody who lives out here. He’s got a vehicle. It’s a piece of crap Junker, but it runs."

Damon Baird: "What. You know one of these Stranded guys?"

Dominic Santiago: "Yup. There’s a camp up ahead."

Damon Baird: "So… what? You hang out with Stranded?"

Dominic Santiago: "I don’t "hang out", dickwad. I’m looking for somebody."

Right Path - The High Route - Choosing the right path, quickly run along the trench and follow it to the far end, grabbing the frag grenades located there. Climb over the collapsed pillar and ascend the stairs inside the building and turn left. This two story room contains a pair of Boomers down below, (A cut scene will be activated previously to alert you of their presence) make sure to defend your squadmates here. You're at a safe location, so fire away. Switch to your frag grenades and aim so that they bounce directly below the two Boomers, who are at this point unaware of your presence, get close enough and the 1 grenade will be enough to take both of them out.

Continue up the hall to the right and advance toward the Drone behind the toppled pillar. Take him out, but don't try to ambush him with your Chainsaw. Fall back behind the stone pillar and take him out from there, either by shooting, or Chainsawing him when he attempts to climb over. Proceed through the door and the hallway and you've reached the checkpoint. Stock up on some rounds to your right and then follow the path out onto the fire escape and descend onto the street. Grab the frag grenades under the stairs and slowly enter the alley with the Lancer in hand.

Aim near the building's corner, then make sure to aim for the head. Drop those Grenadiers as quickly as possible, Dom and Cole should then enter the area on the opposite side of the chainlink fence, help them out with the Lancer wherever possible. Be wary of a Sniper in the collapsed wall of a building straight ahead from this location. Continue into the building warily and make sure to throw a frag at the Troika to knock it out before it causes some serious damage.

Left Path - The Low Route - Choosing the left path, cross the open yard and enter the rubble-strewn building beyond the pillars. Inside a pair of Boomers emerges from the right, blowing straight through the wall. Take cover behind the toppled pieces of concrete and give an opportunity for Dom and Gus a chance to take one of them out. Use your Lancer to take out the surviving Boomer. Make your way around the Corpsers hole in the distance and take cover in the courtyard near the statue. Dom and Cole will help in taking out the Drones but be prepared to fight if one manages to make it under the balcony and out of sight of the others. Also, be careful of a Sniper on the other side behind a collapsed wall in a building.

Make your way through the room with empty shelves and use the button on the door to exit into the alley outside. Make sure to throw a few frags over the fence to hake out the two Grenadiers heading for Dom and Gus to ensure that they survive. Then begin to systematically sweep the street and the building to the right until all Locust are dead. The Gunner in the next room has Dom and Cole pinned down but will quickly turn his attention to you if you stay out in the open. Get in cover and throw in a frag grenade to finish him.

Both - After you clear the area, gather up the ammo and have JACK rip open the door to the left of the Troika. Follow the path through the next building into the next part. Dom knows one of the Stranded and thinks he can borrow a vehicle, so he'll lead the way to the Camp...

Retrieved from "https://gearsofwar.fandom.com/wiki/Tick_Tick_Boom?oldid=138249"
Community content is available under CC-BY-SA unless otherwise noted.