"Convicted for insubordination and treason, Marcus was incarcerated in Jacinto Maximum Security Prison. Known as “The Slab”, this prison is not a correctional facility – it’s a place where Sera’s worst offenders are locked up and forgotten. The inmates are brutal, parole is not an option, and the average life expectancy is about two years. But that was before the Locust showed up, and what couldn’t get worse, suddenly did. Now your life expectancy there is around 2 minutes."
—Gears of War 3 description of The Slab

The Slab is a map added in the Fenix Rising DLC for Gears of War 3. It is based on the Jacinto Maximum Security Prison. It returns in Gears of War 4 as part of a free map DLC that Season Pass owners could play exclusively from April 4th, 2017. It became available to all players on April 11th, 2017,[1] but is only available for private play if the Season Pass has been purchased or the map is separately downloaded.

In Gears of War 3, there is an easter egg on the map which involves some events from Gears of War, but none have came close to solving it so far.

The Slab in Gears of War 3 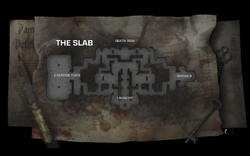 Retrieved from "https://gearsofwar.fandom.com/wiki/The_Slab?oldid=133810"
Community content is available under CC-BY-SA unless otherwise noted.