This article is a Stub and needs your help. Please improve it by adding more information.
This article is for the snipers of the Swarm. For the Locust Snipers, see Sniper.

Swarm
Snipers were Swarm Drones punished with removal of one of their eyes and assigning to rear positions on the battlefield. Armed with Longshot Sniper Rifles, snipers could be easily identified by their asymmetrical heads.

The swarm sniper were drones that had one eye removed and a head growth and use longshot sniper rifles. Unlike their locust counterparts who used specialized goggles for thermal and zoom to see far away the swarm sniper had a highten sense of vision to pop a gears skull for miles away.

Snipers have the lowest health of all Drones, but are seldom reachable on foot. They prefer to stake out in a covered, elevated position, where they can fire their Longshots from afar. They will stay behind cover until they take aim; the glint of the rifle scope betrays their position.

If you have a precision weapon, such as an EMBAR or your own Longshot, exploit their low health and aim for the head. 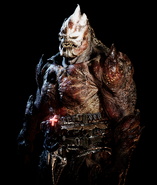