Gears of War Wiki
Register
Don't have an account?
Sign In
Advertisement
in: Males, Characters, Gear Soldier,
and 2 more

Major Sid Redburn was a Gear of the Coalition of Ordered Governments Army in the Pendulum Wars and Locust War. Early in his career, he was stationed at the New Hope Research Facility where the children of the Imulsion miners who are sick with Rustlung are cared for and studied in order to find a cure. However, due to the unethical treatment and experimentation that he was ordered to perform on the children, Private Redburn became one of the many staff members to whistle blow the operation. The facility was shut down. Major Redburn served in combat during the remainder of the Pendulum Wars.

Major Redburn survived the initial assault of the Locust War when the Locust Horde, descendants of the children that he was forced to torture, emerged from the Hollow and slaughtered billions of humans. In 1 A.E., following the Hammer of Dawn Strikes, he was placed on a mission along with Sgt. Gabriel Diaz to assassinate Ukkon, who was one of the experiments that Major Redburn was familiar with at New Hope and became the Locust Horde's top scientist in creating the creatures of mass destruction. Following the assassination of Ukkon, Major Redburn along with his comrades in Alpha-Two became Stranded due to Chairman Richard Prescott attempting to kill them with the Hammer of Dawn after learning about New Hope.

Sid Redburn was born in Tyrus and was raised in the family to become a Gear. His family was well-connected and friends with those in the high positions of the Coalition of Ordered Governments. Among them was Colonel Tolman, who had close ties to Chairman Monroe.

Sid Redburn eventually joined the Coalition of Ordered Governments Army as a Gear with the rank of Private.

"Long time ago, I got posted to a genetics lab. They were supposed to be curing Rustlung. It went sideways. Instead of going after a cure, the doctors made... monsters. Convinced Chairman Monroe the things had military potential. But they were feral. Mindless. Except for one. Ukkon."
—Major Sid Redburn about his experiences at New Hope.

After serving sometime as a Private in the Pendulum Wars, the Coalition High Command offered Private Redburn a "Career-making" opportunity that would not only advance his career, but also serve toward helping the greater good. This opportunity was being stationed at the New Hope Research Facility as a guard. Unknown to most of the population, the miners of Imulsion and their families began suffering from a fatal disease that was known as Rustlung and the Coalition opened the New Hope Research Facility to house and study the children of the Imulsion miners who are sick with Rustlung in order to find a cure.

Redburn was stationed at the facility by agreeing to the position out of patriotism and heroism. However, the Director of the facility and a geneticist named Dr. Niles Samson became less interested in simply finding a cure for Rustlung and he wanted to evolve humanity into superior and immortal beings with the potential to use them to end the Pendulum Wars. While he was stationed at New Hope, Redburn was ordered to chain the children to their beds, pin them to the floor while the scientists tapped their blood and treat them like prisoners. Dr. Samson began to mutate the children with the DNA of the indigenous creatures of the Hollow by transforming them into Sires.

Most of the Sires are feral and mindless creatures. However, one of the children named Ukkon retained his mental capacity and he terrorized the facility. Disturbed by Ukkon and the unethical treatment and experimentation on the children, Pvt. Redburn wrote to a family friend named Colonel Tolman to alert Chairman Monroe about the work that was being done by Niles Samson at New Hope. Unfortunately, the letter was intercepted by New Hope's security and Niles Samson ordered the termination of Private Sid Redburn. Before leaving the New Hope Research Facility - Sid Redburn managed to steal a file on Nile Samsons's work, including details on Patient Zero - Ukkon.

Sid Redburn took the files and hid them within an abandoned outpost in Winlock, Vasgar - a neutral country during the Pendulum Wars. The New Hope facility was exposed for its crimes and was officially shut down by Chairman Monroe. However, many of the subjects and scientists including Niles Samson disappeared before the shutdown and appearing before court for their crimes.

Six weeks after the end of the Pendulum Wars, a race of subterranean creatures that are called the Locust Horde emerged in every major city on Sera to slaughter the human race. This day became known as Emergence Day which was the beginning of the Locust War. Within the first twenty-six hours of the attack, the Locust Horde managed to massacre 25% of the global population. Major Redburn managed to survive.

However, Major Redburn realized that the Locust are the descendants of the Sires that he was in guard of at New Hope decades before. He realized the truth when among the Locust was Ukkon who became the Locust Horde's top scientist and geneticist was responsible for the creation of the Locust army's various beasts such as the Corpsers, Brumaks and Reavers.

Within the first year of the Locust War, Chairman Tomas Dalyell died in office and he was replaced by his Deputy Chairman Richard Prescott. Chairman Prescott was informed that since Emergence Day, each city that the Locust occupied would gain spoils of war and each are used as a stepping stone to reach Ephyra which was one of the last safe places on the planet due to it being almost completely protected by the Jacinto Plateau. With only a limited time to prevent the enemy control, Chairman Prescott ordered that every major city that was outside the Jacinto Plateau should be destroyed by the Hammer of Dawn.

Nearly at the zero hour, Major Redburn was ordered to recover the classified documents about Ukkon from CIC Aldair along with Sergeant Gabriel Diaz who Major Redburn extracted from a bunker at the Aldair Army Base with his squad that was awaiting the Hammer strikes. Major Redburn and Sgt. Diaz fought through the Locust-infested city of Aldair and they gained access to the CIC. In General Becket's office, Sgt. Diaz was able to locate the classified documents on Ukkon. As they found the documents, the Hammer of Dawn Strikes began. While they are unable to return to the bunker, Pvt. Redburn and Sgt. Diaz found a bank vault to take shelter in.

Moments after, Pvt. Redburn and Sgt. Diaz emerged from the bank vault as the city was incinerated. While fighting the surviving squads of the Locust, the two managed to return to the APC. However, upon returning to the Aldair Army Base, they found it destroyed not by the Hammer Strikes, but by the Locust. Major Redburn was convinced that it was Ukkon. Major Redburn had Sgt. Diaz contact Chairman Prescott about the obtained files. In their contact, Chairman Prescott assigned Sgt. Diaz to assemble a task force with Major Redburn to search for and assassinate Ukkon.

With Sgt. Diaz's motor pool destroyed, he and Major Redburn began a search for Echo-Five which was another mop-up squad that was stationed in Aldair. Upon driving through the streets, Major Redburn and Sgt. Diaz found Marcella Trinh and Tyrone Shephard who are the two survivors of Echo-Five. The survivors revealed that they are ambushed up the road. Upon returning to the ambush site, they are attacked by the Locust squads. After securing the area, they learned that most of Echo-Five was lost and they are attacked by a new form of Drone that was full of Imulsion.

Sgt. Diaz realized that Ukkon was destroying the mop-up crews while Major Redburn discovered that whoever was left of Echo-Five was taken alive by Ukkon. Advising Sgt. Diaz to use the Tac-Com APC to find their location which Sgt. Diaz was able to find, believing them to be taken to be processed in the Locust Torture Pods. Major Redburn and Sgt. Diaz decided to rescue the Echo-Five prisoners without the help of Trinh and Shephard as they believed that they would slow them down.

Following the rescue of Echo-Five, Major Redburn and Sgt. Diaz picked a distress signal up on their Tac-Com from the industrial district of Aldair. Upon arriving, they discovered that a group of civilians who survived the Hammer of Dawn Strikes created an outpost that was led by Mikayla Dorn, but they are under attack by the Locust forces. Major Redburn along with Sgt. Diaz and Echo-Five helped defend the Outpost and rescue a majority of Mikayla's Outpost.

Following the rescue, Mikayla was resentful about the Gears as she and her group are Stranded which are the survivors of the Hammer Strikes who resented the Coalition for killing the civilians and destroying the planet. However, Sgt. Diaz argued that had it not been for them, she and her outpost would have been overrun and he offered her people to join them in the fight. Mikayla saw the conscripting of the civilians as desperate and she knew that they are after Ukkon.

She revealed that she knew about Ukkon because of the places that he regularly visited to scavenge. She offered to show them where if Sgt. Diaz was able to find the appropriate parts and repair her Mammoth. Major Redburn and Sgt. Diaz are successful in retrieving the supplies for the Mammoth after fighting through the Locust and they returned to the industrial district where Sgt. Diaz who was from the motor pool was able to fix the Mammoth to transport her and her people. Mikayla honored her end of the bargain and she escorted them to the warehouse district of Aldair where Ukkon frequented.

Remainder of the Locust War[]

Sid Redburn officially abandoned the Coalition along with Gabriel Diaz. However, the pair still kept Alpha-Two intact and used the Coalition's resources, but they continued as Stranded by trying to take the Locust Horde and the remainder of Ukkon's army down. Gabriel and Reyna would eventually form a romantic relationship during the war which ended in 17 A.E. after the detonation of the Imulsion Countermeasure Weapon by Professor Adam Fenix. The weapon destroyed all of Imulsion, vaporized the Lambent and crystallized the Locust Horde. It was unknown what happened to Sid Redburn following the assassination of Ukkon. Due to his advanced age, it was unlikely that he was alive during the reconstruction of the Coalition in the Interwar Period, the Outsider Movement, or the Swarm Invasion.

I apologize for the protocol breach of writing you directly, but I am praying that as a family friend, you can help me with a desperate situation.

When Command offered me a guard position at the New Hope Research Facility, they called it a career-making opportunity: A chance to support the research that would cure Rustlung forever. But, that's not what's happening here.

I was ordered to chain the ill to the bed frames like prisoners, not patients. I had to pin the screaming children down while the lab-coated men with needles tapped their blood and left them to shiver on the floor.

Niles Samson isn't making a cure. He's making things. I can't say what they are. No one can. But, no good can come of it, I promise you.

Intercepted in mailroom. Get Redburn OUT of here!
-NS 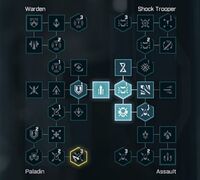 In Gears Tactics, Sid has the following skills: