Security is a multiplayer map in Gears of War 2, based off of the New Hope Research Facility, with the lasers also based off the facility's own security system. It returns in the form of a COG depository in Gears of War 4 as part of a free map DLC that Season Pass owners could play exclusively from May 2nd, 2017. It became available to all players on May 9th, 2017,[1] but is only available for private play if the Season Pass has been purchased or the map is separately downloaded.

It is symmetrical, and features red lasers throughout the map that cause death upon contact. In the middle of the map, there is a button that releases the lasers for a short period. One location enclosed within the lasers holds a Mortar or Mulcher, and another holds a Scorcher Flamethrower. There are alleys behind you if you are heading to the Mortar/Mulcher section, both housing either Bolo Grenades or Ink Grenades. Security is one of the most revered Maps to play in Gears of War 2's Horde Mode due to the area opposite the building which consists of a front step entrance with two side exits that can be blocked off by the lasers preventing the Locust Horde from being able to engage you in melee combat. Also, as stated above, the Mortar comes in handy as it is highly effective due to this map's relatively small size compared to others allowing multiple Locust to be blown sky high with ease. However, some of the Locust can deactivate the lasers by pressing another button in the building, and there is around a one-minute delay before it can be re-engaged. There is also a loud siren that indicates the lasers are activating, leaving the players with around 8 seconds to enter the area before the lasers activate.

The best tactic to use in Horde mode is to get to the Mortar/Mulcher spawn and just wait out the Locust by sniping them or using the Mortar or the Mulcher. But you have to watch out because the Locust can shut down the lasers; Wretches to Flame Boomers can shut off the lasers, however the Boomers, Maulers and Butchers seem to have problems understanding how to work a button. Another tactic to use is to shoot the bigger guys and let them walk into the lasers. Butchers seem to be attracted to them. 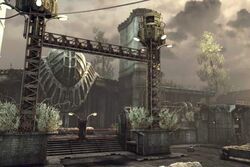 Security in Gears of War 2 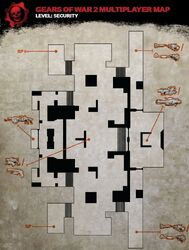 Retrieved from "https://gearsofwar.fandom.com/wiki/Security?oldid=144212"
Community content is available under CC-BY-SA unless otherwise noted.