Gears of War Wiki
Register
Don't have an account?
Sign In
Advertisement
in: Males, Characters, The Swarm

Edit
watch 02:30
Dead Cells Final DLC - The Loop
Do you like this video?
Play Sound

"The original Locust, the big ones -- they're called Scions. They're in charge, and they're using us to grow an army."
—Sgt. Marcus Fenix after being released from a Swarm pod.

Scions were Locust Drones that had survived the Locust War and evolved from exposure to the Imulsion Countermeasure Weapon. Because of their ancestors, the Locust were susceptible to the Imulsion Countermeasure due to Imulsion in their genetic code. However, due to the genetic engineering by their creator, Dr. Niles Samson, they were designed to adapt, hibernate, and evolve in order to survive generational conflict. When hit by the Imulsion Countermeasure - the Imulsion in the Locust's genetics was removed and crystallized through the skin - forming an impenetrable crystalline shell or cocoon of Imulsion crystals. For twenty-five years inside the shells, the Drones evolved into the Scions. To rebuild their army, the Scions created and led the Swarm until the ascension of their new queen. Exceptionally larger and stronger than their previous forms, the Scions are known to wield heavy weapons and possess the ability to empower and rally Swarm Drones by emitting osmium dust.

Following the death of Myrrah, the detonation of the Imulsion Countermeasure Weapon triggered ripples of the blast at all miles radius ending the Locust Horde for good, rendering them to presumed extinction in 17 A.E.. After the detonation, strange crystallines made from immulsion started forming on over thousands of Locust corpses and the dead bodies were eventually encased in thick crystallized shells. Although the COG initially planned to burn the bodies to ash, the crystal shells made that impossible and they instead committed to dumping thousands of dead Locust bodies in abandoned sites for mass burial sites and bury them underneath. Little did humanity know, the countermeasure weapon never killed the Locusts; rather, it forced the Locusts to shut down for preservation, enhancing them and mutating them in states of prolonged metamorphosis.

In 42 A.E., the original Locusts, now evolved and much stronger than before, had awoken started emerging from crystallized shells in burial sites for the first time in twenty-five years, now calling themselves Scions. With the Lambent extinct and Nexus destroyed, the Scions intended to continue what they had started in the previous war, to kill all humans and to colonize the surface of Sera. They also sought the replace their fallen Queen with her daughter Reyna Diaz as they could not wage war as effectively as they once had without a Queen to guide them.

Despite having been buried with stockpiles of their own weapons, the Scions lacked the overwhelming numbers they previously had and were in need of more soldiers. By unknown means, the Scions had discovered a way to use the biological masses found in the burial sites to incubate and link living creatures (including humans) into a neurobiological network that began transforming them into a whole new species of creatures that would follow their commands. Being able to transform anyone they captured in just a few hours, the new race of creatures the Scions had created became known as the Swarm. Although they had no Queen to lead them at the time, the Scions took command of the Swarm until a Queen could be found.

Now able to transform their enemies into loyal soldiers, the Scions led a series of covert raids on COG settlements and Outsider villages by having dozens Snatchers abduct anyone they could capture and pod up. [1] While it is unknown how long these raids had been happening, the Scions appeared to have kidnapped thousands of people by the time of their discovery as many of the Swarm soldiers had already begun using weapons and armor used by their predecessors.

Following the successful retrieval of the Fabricator and the skirmish orchestrated by First Minister Jinn, the Outsider settlement, Fort Umson became under siege later that evening when dozens of Snatchers led by a unique Scion known as the Speaker began abducting villagers, including Oscar. Terror ensued in the village when Snatchers started abducting the Outsiders while Reyna was attacked by the Speaker who grabbed her by force but fought back against the Scion as she managed to sever his left hand. As the fight continued, the Scion gained the upper hands to ultimately subdue her and take her to the Tollen Dam Hive, leaving JD, Del, and Kait  behind. In the aftermath of the attack, the trio break out of the shed where Reyna locked them in then noticed The Speaker's severed left hand and the yellow thick crystals embedded. As they discover it, JD used his knife to cut off a piece of crystals for him to take and the trio went their way to seek out JD's father, Marcus Fenix, in search of answers.

Later that night, JD, Del and Kait tracked down a Snatcher that abducted Marcus, following its path as the Snatcher descended into the osmium mine beneath Fort Reval. As the trio made their way to the mine, they stumbled across numerous Locust shells, and as they inspected more in the mine, they were attacked by more than one Scion ans the trio would fend off more Scions as they pushed deeper into the mine. Tracking the static noise as they went deeper into the heart of the hive, JD desperately ordered Del and Kait to search for the newer pod until they confronted the Snatcher that took Marcus. After killing the Snatcher, JD, Del and Kait found the pathway where the Snatcher first came from. The trio saw the new pod and freed Marcus. Regaining consciousness, Marcus then explained that when he was in the pod, he was in the Swarm network. Not only he felt all the people that had been podded, including people from Kait's village, he'd learned that the Scions held Reyna alive in another burial site not too far and also learned the truth of the original Locusts who never went extinct as humanity believed. During the ambush at the Tollen Dam, the Speaker was killed by Kait. It was later revealed that the Speaker was planning to transform Reyna into the new Swarm Queen since she was the sole heiress of Queen Myrrah.

As the Swarm War began in earnest, the COG began encountering an elite class of Scions called Wardens. They were more heavily armored than a typical Scion and specialized in melee combat, in which they wielded dual Breaker Maces. According to Del, the presence of a Warden often indicated that the Swarm was scouting a location to become a new Hive. A number of Wardens were encountered and killed by Kait and Del in Kadar Valley, and by Delta-One in Vasgar and during the Battle of Old Ephyra.

Scions serve much the same role that Boomers and Kantus filled prior to Gears of War 4. They are large, durable, easy to identify, and are the deadliest of all humanoid Swarm given their toughness and handling of heavy weapons. Scions stand tall above the field and move slowly, making them easy to pick out and target. Their bulk prevents them from entering cover, but they can vault over cover that's in their path. They cannot be chainsawed or bayonet charged either. They can be briefly staggered by inflicting enough damage to them.

They possess the ability to rally nearby Swarm, reviving any downed Drones as well as empowering those nearby. These empowered Drones have a faint glow about them, and make any Scion a high-priority target. Killing a Scion does not remove their buff on other Swarm, which means that death is not an immediate relief during combat. Prioritizing a Scion or the Drones at his disposal is a matter of its positioning and the threat numbers of Drones might possess. Scions are vulnerable while they're rallying nearby Drones, which is when it stomp its foot and slowly raise its fist in a cloud of gas, accompanied by a loud hum. It's stationary during the process and can't retaliate in any way, making it very exposed.

Scions also carry a variety of signature weapons, using them with to similar effect as their Boomer predecessors, and should be dealt with according to what weapon they're using. Scion Dropshots are your top priority, as they're extremely accurate with their weapon and can force you out of cover (they can even headshot you if you're too stationary, such as when using a turret). Scion Boomshots are next (if you're in Horde), followed by Scion Mulchers, then Buzzkills. Don't underestimate these latter two classes, however; their weapons can still inflict heavy damage to a careless player or pin you down while other Swarm rush your position. You can identify each Scion class by what they shout:

Unlike the Boomers of the past, Scions don't always preface their attacks with a phrase, so you can't solely rely on auditory clues when fighting them.

Scions are capable of melee, and can execute a downed player by picking them up and crushing their head.

Various Scions are known with each differing in appearance and weapon choice. In the campaign, all possess the ability to empower and rally Swarm Drones, however in Horde, this is exclusive to only one Scion type. 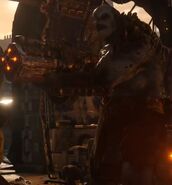 Scion in Gears of War 4 Multiplayer. 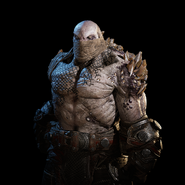