Rustlung is a multiplayer map that was released in the first DLC pack for Gears of War 3 as part of the Horde Command Pack. It returns in Gears of War 4 as part of a free map DLC that Season Pass owners could play exclusively from June 6th, 2017. It became available to all players on June 13th, 2017,[1] but is only available for private play if the Season Pass has been purchased or the map is separately downloaded.

It's a small map, but makes up for it by having unique multiplayer concepts such as being able to find Smoke Grenades and having a Silverback in the center. In Gears of War 4, the Silverback is replaced by an RL-4 Salvo. There are also switches on either side of the map that, when flipped, will raise or lower torpedo clusters in the middle of the map forming temporary cover.

The map is small and compact. The south end contains a turret with fortifications (barriers, decoys, sentries), with three pathways. The map is very difficult in later waves when there are Grinders/Maulers crowding the map.

A Silverback is available to use in the center of the map. However, you need to wait about 5 minutes before you can activate the switch. Once a speaker announces that the Level 1 stage for the Silverback is complete, go to the center of the map and find the platform which raises it. You must then pull the switch (which takes a few seconds, so make sure nobody is near you) and then wait a few more seconds for the Silverback to rise up and once you get in you can blow the hell out of anything that moves. The only drawback of this is the enemy team can throw smoke grenades, which causes the user to let go and make the Silverback enter a "reboot" mode, allowing the teams to fight over it.

Rustlung in Gears of War 3 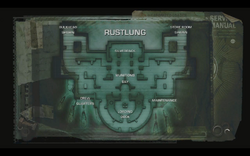 Retrieved from "https://gearsofwar.fandom.com/wiki/Rustlung_(map)?oldid=134164"
Community content is available under CC-BY-SA unless otherwise noted.