Raven Down is a multiplayer map in Gears of War, released on January 10, 2007 in a map pack alongside Old Bones. The map pack was sponsored by The Discovery Channel in promotion of their TV show "Future Weapons".[1] It was added in the Fenix Rising DLC for Gears of War 3,[2] and returns in Gears of War 4 as part of a free map DLC that Season Pass owners could play exclusively from July 5th, 2017.[3] It became available to all players on July 12th, 2017, but is only available for private play if the Season Pass has been purchased or the map is separately downloaded.

The map is set in a tight intersection with a downed King Raven in the center, and the only pick-up weapons are frag grenades in the back of two pick-up trucks on opposite sides of the map.

To get the Snow Cleaver, play Horde and buy the "Fire" spawn command post and the "Monument" command post, then head over to the farthest point possible in the "Train" spawn. Stand in the corner and look very far out, up and left; you should see a small walkway between two buildings up high. The first snowman is in the farthest doorway on the walkway. Shoot the snowman in the doorway (you'll know if you hit it, it'll explode into smoke), then go to the "Monument" area and look to the back of it into the building. Look at the second-to-left window and back up so you can see the second snowman in the window (it's quite far back so just keep looking). Shoot it, then go to the "Fire" spawn again and look far out like the first. Look on the ground near the second tree down. Shoot it, then go to the "Parking Garage" and hit the garage door button. Once it's open, the snowman will be standing directly in-front of you. It will turn its head and explode, revealing the cleaver that can be bought for $900.

Raven Down in Gears of War

Raven Down in Gears of War 3 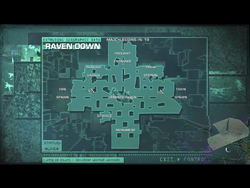 Retrieved from "https://gearsofwar.fandom.com/wiki/Raven_Down?oldid=134955"
Community content is available under CC-BY-SA unless otherwise noted.