Edit
watch 02:30
Dead Cells Final DLC - The Loop
Do you like this video?
Play Sound

"When they charge, don't bother with body shots! Go for the head!"
—Paduk, telling the rest of Kilo Squad how to deal with Ragers.

The Rager was a specialized Locust breed that appeared during the Locust War, and were known for their ability to metamorphose into monstrous forms. Due to their reckless abandon, large amounts of Ragers died off early in the war, becoming virtually extinct.

"I think I offended this one!"
"Well, offend him some more before he gets too close!"
—Lt. Damon Baird and Pvt. Augustus Cole upon seeing a Rager transform for the first time

Ragers were faced by Kilo Squad in the Destruction of Halvo Bay. They were first encountered at the Halvo Bay Academy outside of the R&D labs and continue to appear through the Academy, a number of them also appeared at Seahorse Hills, they became an obstacle in Kilo's way while some explosives were about to detonate. They would shortly after lay siege to Kurt Elliott's mansion. While Troy opened a door to reach the rooftops of Halvo Bay, a large number of transformed Ragers tried to destroy the bot. The Ragers almost overran Kilo Squad but they managed to fend off the attackers. Later, after Karn's supposed defeat, more Ragers attacked the squad on the rooftops of the city. A number of them later ambushed the Gears outside the courthouse they were held in. At the Plaza for the Tyran Dead they aided General Karn and its Shibboleth in a last stand against Kilo Squad and Col.Ezra P. Loomis. They fell to the Gears hands just moments before their general and its mount fell too.

"Ragers? Where have they been hiding?"
—Damon Baird upon seeing Ragers again for the first time in 17 years

A number of Ragers were encountered during Baird and his squad's return to Halvo Bay. Baird was surprised to see them as they were believed to have been wiped out early in the Locust War. These Ragers were allied with the Savage Locust and became even more feral than when they were at the Horde's command. They attempted to stop the Gears from reaching Paduk's camp and later attacked them while trying to take down the Regency Hotel. After the former members of Kilo Squad left Halvo Bay, Ragers had apparently become extinct after the Imulsion Countermeasure Weapon was deployed though its unknown if any mutated to become part of the Swarm.

The rather lithe and unassuming Ragers were known to carry the Breechshot rifle, but they were far more dangerous when enraged. When angered, they would go into a state of metamorphosis due to Imulsion build up inside them.[1] A Rager's skin would shift to a bloody-red color, would double in muscle mass, sprout blood-red spikes and move with almost animalistic fury, essentially becoming a miniature Berserker for a short amount of time, however they cannot withstand the same amount of fire that the Berserker can.

Fortunately for Gears fighting them, they cannot stay in their enraged state for prolonged periods of time. Because of this, such moments pass by quickly and the Rager is returned back to its normal form after a short amount of time.

A Rager in it's natural state. 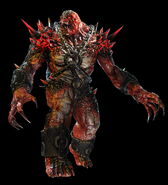 A Rager in it's Berserk state.

"When they charge, don't bother with body shots! Go for the head!"
—Garron Paduk to his fellow squadmates

When in their more 'docile' state, Ragers can be beaten much like normal Locust troops. They can be gibbed with explosives, headshot with a precision weapon or executed with a chainsaw or bayonet. However if they do mutate, heavy weapons and headshots are advised to deal with them. In their mutated state, Ragers can only be chainsawed and retro-charged from behind.