watch 02:45
Wiki Targeted (Games)
Do you like this video?
Play Sound

Swarm Pods are thick, fleshly incubated pods created and deposited by Snatchers where Juvies and Screamers are both created and housed from.[1] The incubation process remains mostly unknown although it begins with humans being systematically “snatched” by Snatchers, taking them directly to Locust burial sites where the sites has gradually transformed into Swarm nests. Upon arrival at the sites, humans inside the Snatchers’ stomach are then coated into pods where they are deposited against walls, ceilings and floors. Whilst humans are inside pods, they are connected to the Swarm network to the exact point where they can feel and see each other, like Marcus Fenix stated when he was podded for a very brief period of time. If the Swarm pods are kept intact for longer periods of time with little or no impact, humans inside are forced to ingest liquid as they undergo in transformation, thus “converting” them by ripping the bodies apart and remodel human remains together in the process of creating Juvies and Screamers.

Pods, on the other hand, can offer only one advantage: it can be used to take cover from heavy fire by both Gears and Drones. If a pod bursts, a Juvie or Screamer may either emerge, or nothing at all but human remains. Shooting pods to remove cover from Drones can be useful, unless if a Screamer emerges, it emits a high-pitched scream that alerts plenty of Juvies in the vicinity, including pods closer to your presence, so caution is advised when attempting this.

A new Swarm pod containing Marcus Fenix is embedded within dozens of Swarm pods and tendrils in the Osmium Mine of Fort Reval. 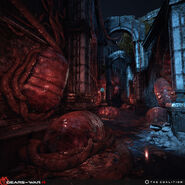 Dozens of Swarm pods embedded in walls and floors through the alleyway of the ruins.
Add a photo to this gallery

Retrieved from "https://gearsofwar.fandom.com/wiki/Pod?oldid=151823"
Community content is available under CC-BY-SA unless otherwise noted.