Gears of War Wiki
Register
Don't have an account?
Sign In
Advertisement
in: Males, Pages with reference errors, Characters,
and 4 more

View source
watch 04:03
Wiki Targeted (Games)
Do you like this video?
Play Sound

"Hey! We're looking for the chief. Old guy. Smells like beer. You seen him?"
—Kait, addressing her uncle Oscar

Chief Oscar Diaz (COG tags CSID 395274-T2V26-LP)[2] ES was a former Gear Sergeant in the Pendulum Wars and Locust War, and an Outsider in the Outsider Movement. He was the brother of Lt. Colonel Gabriel Diaz, adoptive brother to Wyatt Callahan, the brother-in-law to Reyna Diaz, and the uncle to Kait Diaz.

Oscar Diaz was born and raised in Montevado. He was the younger brother of Gabriel Diaz. In 14 B.E., when Oscar was eleven and Gabriel was thirteen, their parents died and the two were brought to the Mercy School Orphanage. There, they met and rescued fellow orphan Wyatt Callahan from getting beaten by the other boys in the bathroom. Wyatt became Oscar and Gabriel's best friend and an honorary brother.

Oscar served for fifteen years in the Coalition of Ordered Governments Army and became a highly decorated Gear[3] along with his brother during the Locust War. Either due to his efforts in Pendulum Wars or Locust War, Oscar, at some point, received the Embry Star.

Oscar served during Operation: Hollow Storm and was present for the Siege of Nexus.

Following the end of the Locust War seventeen years after Emergence Day, Gabe and Oscar abandoned the newly reformed Coalition of Ordered Governments to join the Outsider Movement, a movement of people, called Outsiders, comprised of Stranded and former loyal COG citizens who reject the new COG and live outside COG jurisdiction in the Wilds. Gabe and Oscar went on to build and lead Fort Umson. In the following years, Oscar became an alcoholic.

At some point, Gabe met and married Reyna. They later conceived, and Oscar became an uncle to Kait Diaz. The village became notorious for raiding Settlements for its supplies. At some point during the Outsider Movement, Gabe died, resulting in Reyna leading the village with him by her side. Oscar, being a decorated Gear, was in charge of training villagers and his niece Kait in combat and gun use. However, his methods of training were apparently left to be desired. Oscar was also in charge of Mare breeding with his stallion, Chuzz.

Six months later, Oscar accompanied Kait, JD Fenix, and Delmont Walker to COG Settlement 5 that was under construction to steal a Fabricator needed for the village. After surviving a Windflare outside the Settlement, they made it inside, passing through several areas undetected and avoiding the Watchers until one caught them. When the Watcher called several Shepherds to escort them off the premises, Oscar shot the Shepherd. They fought their way through the Settlement to the construction hub, where Oscar stayed outside to guard JD and Del who went inside to retrieve the Fabricator. Against his orders, Kait also went with them.[3]

Oscar was later captured by two DR-1s, accompanied by First Minister Mina Jinn's personal Shepherd, but after the three kids returned with the Fabricator, a transport smashed through the DR-1s and Shepherd, and Oscar was freed.[4] Oscar and Del carried the Fabricator through the Settlement to the gate, and the four raiders escaped the Settlement.[5]

Back at Fort Umson, Oscar helped organize a defense against the COG who were en route to the village for kidnapping COG citizens and soldiers. The COG sent heavy DeeBee forces and badly damaged the Village, but were successful in repelling the attacks.

Later that night, mysterious creatures ambushed the Village. The creatures were kidnapping the villagers, as their leader personally attempted to abduct Reyna. Oscar tried to rescue Reyna by attacking the leader, but the leader broke his wrist, stabbed him in the shoulder, kicked him away, and kidnapped by a Snatcher.[6] Reyna was then taken along with the rest of the village except for Kait, JD, and Del. As the Snatcher was bringing Oscar to the Hive, he managed to kill the Snatcher that was carrying him with his knife, freeing himself.

After the ambush, Oscar advised Mackenzie and Eli to return and scout Fort Umson in case anyone else survived as it would be easier for them to sneak by any enemy on their travels. Meanwhile, Oscar secured himself in the South Village's Town Hall where Mackenzie laid explosive traps to protect Oscar.

While waiting for help to arrive, Oscar was reunited with Kait - who had been alerted of Mackenzie and Eli at Fort Umson and returned with the two. While Oscar revealed how he survived, Kait revealed that the creatures that attacked their village were called the Swarm, who in reality were the Locust Horde who had been evolving and reemerged recently and have been using humans to transform them into soldiers for the Swarm Army. She also revealed that all the villagers except for her, JD, and Del survived and that Reyna also died after being attached to the heart of the Swarm Hive and heavily mutated, forcing Kait to disconnect and euthanize her.

Oscar, Kait, Mackenzie, and Eli were then able to fight the Swarm, escape the South Village, and reunited with JD and Del, who were once again Gears of the Coalition Army. Kait compelled Oscar and the twins to seek shelter and safety in New Ephyra with them, but Oscar refused due to his hatred and mistrust of the Coalition. Instead, he revealed that he and the twins would be seeking refuge at the nearby Outsider settlement: Riftworm Village - residing within the remains of the Riftworm that was killed during Operation: Hollow Storm in 14 A.E.

Arrival and Leadership in Riftworm Village

Oscar eventually arrived to Riftworm Village with the twins and were welcomed by the community, especially given Oscar's status. While Oscar continued to watch over the twins, he soon became the Chief of Riftworm Village. At some point, he was also able to recover Chuzz from the Wilds. However, the community became regularly ambushed by Swarm forces, but it was always manageable - especially since he then knew his enemy at that point. Oscar ordered that their enemies be placed on stakes around the perimeter to scare off the Swarm and other potential enemies, but it did not work.

Due to the constant attacks and being cut off from other villages that were either ambushed and destroyed by the Swarm or joined the Coalition, supplies and resources began to run low for the community. Oscar began to place stricter rules to protect the villagers, but many began to resent Oscar for resembling the oppressive nature of the Coalition. Many villagers, such as Lena, Norsko, and Freddie abandoned Riftworm Village in order to start a new camp with more freedom.

In the past four months, now Corporal Kait Diaz and Lt. Delmont Walker had been reaching out to Outsider Villages and recruiting them to join the Coalition for protection and to help fight the Swarm together. The last village left standing was Riftworm Village. In Frost of 42 A.E., four months after the attack on Fort Umson, Cpl. Kait Diaz and Lt. Delmont Walker arrived to Riftworm Village to convince Oscar and the villagers to join the Coalition.

Upon reuniting with Oscar, Cpl, Kait Diaz's deal was rejected. As Cpl. Diaz warned Oscar that he and the Riftworm Village will die without the Coalition's help, the Swarm once again pushed an attack. However, they managed to push further in and slaughter many of the Outsiders. During the battle, Cpt. James Fenix along with Lt. Fahz Chutani and Sgt. Marcus Fenix arrived on the scene. But a Snatcher then attacked Oscar and Lt. Delmont Walker before snatching Cpl. Kait Diaz.

"Do your worst, asshole."
—Oscar's last words to the Warden.

While Cpl. Kait Diaz was within a Snatcher, Oscar and Lt. Delmont Walker continued to fight the Swarm and defend Riftworm Village. However, due to her relation with Queen Myrrah, Cpl. Kait Diaz was connected to the Hivemind and compelled by Myrrah's consciousness to possess and lead the Swarm to slaughter the humans. Cpl. Kait Diaz possessed a Scion Warden and compelled it to grab Oscar. Oscar began to shoot at the Warden's head before being picked up. As Oscar began to stab the Warden's arm, he goaded the Scion to do its worst before the Warden crushed Oscar's head, killing him.

The remaining villagers buried him following the battle. After Cpl. Kait Diaz was rescued and released from the Snatcher, she was distraught by her uncle's death - being the last member of her family. His death then compelled Cpl. Kait Diaz to admit to her friends the connection she had to the Locust and Swarm - as she believed it was her fault Oscar died. This admission then led Sgt. Marcus Fenix to guide Cpl. Kait Diaz and Lt. Delmont Walker to the New Hope Research Facility and the Mount Kadar Laboratory to discover the Locust origin, Kait's connection with them, and to disconnect from the Hivemind.

"I'm more of a shoot-than-salute kind of guy."
—Oscar Diaz

Oscar was a boisterous and opinionated warrior who, along with being annoyed at JD and Del's smugness, resented them for leaving the Coalition of Ordered Governments, believing they abandoned their duty as Gears. He has a love for wine and women.[7][8] It is also shown that he does not like the "tin soldiers" that the COG were using.[5] 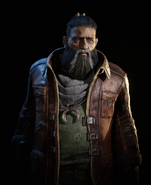 "Oh you got some chuff, boy, don't you?"
—Oscar after JD mocks him for being hungover.