Gears of War Wiki
Register
Don't have an account?
Sign In
Advertisement
in: Vehicles, COG, Gears of War 4

The Ore Transporter is a large, heavy-duty elevator meant to lift large amounts of mined Osmium to be used to procure weapons for the Coalition of Ordered Governments during the Pendulum Wars. These machines were designed and built by Nethercutt Mining, which created other large machines like the Nethercutt Tunnel Boring Machine.

The Ore Transporter was the primary mode of transportation and access to and from Osmium Mine Bravo. At the height of the Pendulum Wars, thousands of metric tons worth of osmium was excavated and transported via the lift to be used in the manufacture of COG Armor and the bayonets of Mark 1 Lancer Assault Rifles. Eventually, the mine ran out and shut down, with the Ore Transporter laying dormant for decades until the end of the Locust War.[1]

Following the conclusion of the Locust War, the restored COG led by First Minister Anya Stroud reactivated the dormant Ore Transporter to be used to dump thousands of Locust Shells on the now abandoned Osmium Mine Bravo. This would later serve as a future Hive for the Swarm.[2]

During the beginning of the Swarm Invasion, Delta Squad, led by JD Fenix, chased down the Snatcher that caught Marcus Fenix earlier on. This led them to Osmium Mine Bravo which has now been converted into a large Swarm Hive.[3]

Returning to the ruined transporter with the rescued Marcus, the squad was about to be overwhelmed when JD figured out how to use the cables as a makeshift lift. Delta Squad shot off the base of the cables which propelled them up, however, they realized that the lift's gear grinders weren't stopping which would mulch them, so the squad destroyed it through gunfire at just the nick of time. The cables carried Delta all the way to the surface where they safely disembarked.[5]

The side deck of the Transporter were wide spaces meant to ferry thousands of tons of mined osmium to the surface. It house several Cargo Carts to easily transport these osmium on mining carts. At the far end of the two side decks were rooms which house the lift controls on the left and the storage and maintenance bay on the right.

The Ore Transporter came equipped with a crane located at the engine room which helps lift heavy osmium. The lift also came with four large grinder wheels to pulverize any rock in the lift's way. The lift's exhaust was located around the sides of the machine.

The Ore Transporter was hoisted via a massive lift motor and pulley system. A large gear grinder system carried carbon-fiber cables which lifted the entire machine with ease.[6] 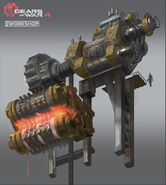