Gears of War Wiki
Register
Don't have an account?
Sign In
Advertisement
in: Articles that need Gearsify-ing, Characters, COG,
and 3 more

"No retreat, no surrender, no defeat."
—Onyx Guard motto.

The Onyx Guard is an elite special operations unit in the COG Army that serve directly under the head of the Coalition of Ordered Governments. They had operated at the sole discretion of the Chairman during the Locust War before vanishing into COG files and vaguely recalled memories, when the unit was transferred to Azura to help defend the people who were there and the resources the COG had on the island. Formed of loyal, battle hardened Gears, Onyx Guard had its own air wing, tank battalions and troop regiments that were capable of fighting on the frontlines and behind-enemy-lines. As such, they were not the only special operations unit in the COG Armed Forces, the other one being the 26 RTI Special Tactics Group.[1]

By the end of the the war as well as the Lambent Pandemic, the Onyx Guard had been mostly effectively wiped out, except for few survivors like Paul Dury and Jeremiah Keegan.[2] The Onyx Guard who later be restored as an elite unit in the newly restored COG who now operated at the sole discretion of the First Minister.

Trained in the Onyx Guard Academy of Halvo Bay, they were a mysterious and deadly unit, The Onyx Guard tended to utilize predominantly black armor and equipment to symbolize their name, however they did carry the standard issue COG Armaments, i.e. the Lancer and Gnasher and utilized completely black King Ravens as transportation.

After Emergence Day and several years of waging war against the Locust, they were thought to have been wiped out alongside many other units.[3] In reality, they were relocated to Azura to protect the social elite and key scientists of the COG.[4] There, they were finally wiped out to the last man when the Locust invaded the island.

During the Destruction of Halvo Bay six weeks after Emergence Day, the Onyx Guard, led by Colonel Ezra Loomis, played a vital role in the defense of the city alongside regular Gears. During the battle, the Halvo Bay Military Academy where the Onyx Guard was trained was taken by the Locust and all of the cadets were slaughtered. The Onyx Guard also fell while defending Onyx Point. Onyx Guard Cadet Sofia Hendrik served in Kilo Squad during the battle who encountered Black-Four in the Museum of Military Glory. Black-Four, derisive of the regular Gears and Sofia who they only saw as a cadet instead of a member of the guard, ordered the squad to defend the entranceway to the museum and later called them for help. Black-Four was eventually killed by General Karn and his forces along with all of the other Gears defending the museum.

After Kilo Squad went rogue and used the Lightmass Missile to destroy the Museum of Military Glory in an attempt to kill General Karn, the Onyx Guard guarded the courtroom during their court-martial with the Locust getting closer and closer as the trial went on. At one point, the Locust broke into the courtroom and killed several Onyx Guard before they were repelled. Before Loomis could announce his verdict, the Locust attacked in force, slaughtering many of the Gears while the rest fled. After the Battle of the Plaza, more Onyx Guard soldiers joined Loomis when he executed Karn and confronted Kilo Squad.[5]

In 17 A.E., a dead Onyx Guard was in Paduk's hideout behind a car with some people who committed suicide to avoid becoming Formers.[6]

During the Evacuation of Ilima in 9 A.E., the Locust attacked the city, led by General RAAM to gain a foothold for an attack on Ephyra. Upon learning of this, Chairman Richard Prescott ordered the Onyx Guard to deploy into the city to try and kill RAAM. After learning that the Onyx Guard was coming, Zeta-Six noted the strangeness of the Onyx Guard being sent in to help an evacuation.[7] Members of the Onyx Guard located RAAM and his bodyguards protecting a Tremor. Dozens of Onyx Guard Gears dropped in around RAAM from the surrounding buildings and a King Raven, including two in Silverbacks. However, they were all slaughtered by RAAM and his bodyguards, and were unable to prevent another Seeder from being summoned.[8] Other Onyx Guards engaged the Locust throughout the city.[9]

After learning of the Locust assault on Ephyra, Cpt. Paul Dury along with a team of Onyx Guards, went to Haldane Hall to pick up Professor Adam Fenix, when they arrived at the scene they found Adam buried in some rubble, Paul Dury ordered some of his men to retrieve him and ordered Jerge to inspect the house for any vital information regarding Adam's research and told him to make sure he checked the basement, which housed a secret laboratory. After the mission to Haldane Hall, Adam was injected with a sedative and taken to Azura.[10]

The Onyx Guard were responsible for the defense of Azura during the Locust attack. Despite their best efforts, the remaining Onyx Guards were slaughtered, and the island fell to the control of the Locust. Some of the survivors were scattered.

Cpl. Rivera and Lowe, two Gears that took part in the defense of Azura, were assigned to protect Chairman Richard Prescott while on Vectes. Originally called the "Onyx Guard rejects" by Damon Baird,[11] , they later joined the Onyx Guard by the time of the attack. Rivera and Lowe were ordered to accompany Prescott as he fled the island in search of Colonel Victor Hoffman and help.[12]

Attack on the Sovereign[]

Cpl. Rivera and Lowe arrived on the CNV Sovereign with Prescott just as the Lambent began to attack. As the attack intensified, they remained in Captain Quentin Michaelson's office with Prescott and Michaelson. The office itself eventually came under Lambent attack and though Delta Squad rescued Prescott, Michaelson, Rivera and Lowe were all killed.[13]

The Onyx Guard was reinstated during the administration of First Minister Jinn, making up of surviving veteran members and new recruits.

Two unnamed Onyx Guards accompanied First Minister Jinn shortly before the Swarm's attack on New Ephyra by invading through the ruins of Old Ephyra. The First Minister ordered them to arrest Kait Diaz in response to her refusal to use her connection to the Swarm to the COG's advantage. They were stopped by the members of Delta Squad. As the battle began, all of Delta pointedly shoved past the Onyx Guards, including JACK.

Several unnamed Onyx Guards later formed the last line of defense of New Ephyra alongside Clayton Carmine at the Railgun batteries and assisted Delta Squad in their fight against the Kraken. Every member of this Onyx Guard unit was wiped out by the Kraken's attack. 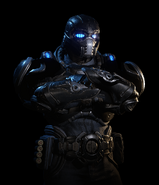 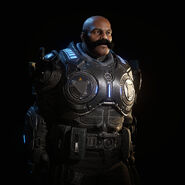