Old Town is a multiplayer map featured in Gears of War 3. It returns as a snowy UIR coastal town in Gears of War 4 as part of a free map DLC that Season Pass owners could play exclusively from March 7th, 2017. It became available to all players on March 14th, 2017,[1] but is only available for private play if the Season Pass has been purchased or the map is separately downloaded.

The map is asymmetrical, and most fighting starts out on the sides and the central market, but after about a minute of game time, the battle becomes 360-degrees and can literally be anywhere, from any direction.

In Horde mode, the bell tower tends to be the most common defense point due to its abundance of barriers, a sentry gun, weapon spawn and decoy. Additionally, enemies can only approach from two sides. However, this can become problematic if a Berserker or Lambent Berserker boss round is initiated, as the few entrances also means fewer exits.

In Gears of War 3, Chickens can be seen roaming the map, and can be killed, causing a puff of feathers and blood. Frag grenades can be tagged to chickens, causing them to become "moving" grenades.

Changes from the Beta to RetailEdit

The first hill in King of the Hill now spawns in the Boomshot alley near the bench rather than in the central market.[2]

Old Town in Gears of War 3 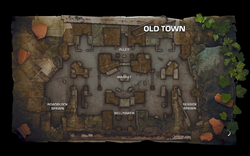 Retrieved from "https://gearsofwar.fandom.com/wiki/Old_Town_(Map)?oldid=144215"
Community content is available under CC-BY-SA unless otherwise noted.