Gears of War Wiki
Register
Don't have an account?
Sign In
Advertisement
in: Characters, COG Navy Personnel, COG,
and 2 more

During the Pendulum Wars, the Merrenat Naval Base was constructed to withstand a full on UIR siege. The base was used to train units taking part in Operation Leveler, specifically in the ensuing beach assaults on Aspho Fields.

A memorial to the marines and Duke of Tollen's Regiment was erected at Pelruan city.[1] In 14 A.E., a marine recon team was sent to Merrenat Naval Base to scout for Imulsion after the sinking of Jacinto.[2]

During the Lambent Pandemic, both Port Farral and Merrenat Naval Base were destroyed when the area was overrun by a forest of Lambent Stalks. It is unknown if any Marines survived the event or whether the branch itself survived.[3]

Due to their maritime nature, Marines were specialized in situations where ammunition and supplies are scarce (i.e. on board an enemy ship or a beachhead assault). As such, Marines are equipped with an ammo belt as well as ammunition pouches to house more resources than a normal Gear.

Moreover, Marine armor were designed differently, to better accommodate a Marines' naval environment. Marine armor is far more streamlined than conventional COG armor, in order to better accommodate a Marine's need to swim in case of emergencies. Furthermore, it is likely that the Marine's helmet has a built-in oxygen respirator for underwater operations.

Likewise, Marine armor is painted silver-grey, for better camouflage in the open waters in contrast to the bright blues of conventional COG armor. 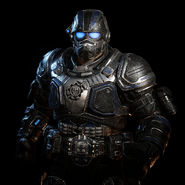 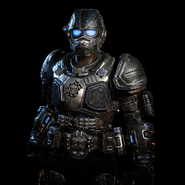