Locust Armor was worn by the majority of the Locust Horde and came in all shapes and sizes to fit the varied physiology of the Horde. A consistent theme of the majority of the armor pieces is that it covers less than that of either the COG or the UIR. This is owed to the fact that the Locusts already have tough and durable skin which is an added benefit as it reduces weight and complexity.[1]

The armor worn by the Locust Drones are the most common, identifiable and ubiquitous armor made by the Locust Horde. These armor pieces are made primarily out of leather rather than composite materials and are often customized, depending on the type of Drone and his specialization.

These tough leather pieces usually came from the hides of the Denizens of the Hollow, with the chest piece being held together by a central triangular metallic plate with the locust symbol embedded in the middle, as well as connecting tubings.

The shoulder pads varies, but it is usually either a flat leather plate or a large diamond metallic pad with the locust symbol brazened upon. The leg armor are leather straps and thick leather boots, to ensure proper durability and flexibility in the rough underground environment the Locust usually lives in. All Drone Armor is sleeveless as the natural hide of a Locust's thick skin is more than enough to resist small arms fire and bayonets.[2]

Drone armors often have red-orange highlights in contrast to the blue found on COG Armor or the pure orange found on UIR Armor. 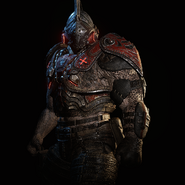 Armor of a Bolter. 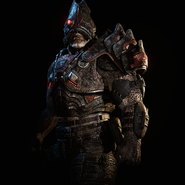 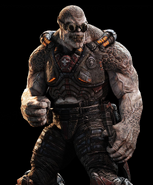 The Savage Locust emerged following the Sinking of Jacinto City and the flooding of the Hollow. With no Queen in sight and dwindling resources, these locusts were forced to scavenge whatever armor pieces and leftovers to form Scavenged Armor.

Like the COG's Custom Armor, Scavenged Armor is a mishmash of whatever materials the Savage Locusts could get their hands on. But usually the most common design is the introduction of a rebreather that allows the locusts to breathe comfortably in the harsh sands of the Deadlands.[3] These rebreather tubes are large and bulky, forming a strong neckguard. The chest armor was also thicker to provide protection for the rebreather apparatus and the drone itself.

Yet, the leg armor and shoulder pads of the Scavenged Armor is lightly covered in cloth, fishnets and light leather.[4] This makes the armor uneven in its overall protection and shows the desperation of resources of the Savaged Locusts.

Savage Hunter without the rebreather apparatus.

The armor of the Kantus priesthood can be best described as an armored vest. As the Kantus is generally a support unit, they usually stay in the backline to heal and buff nearby locust drones.[5] Hence, their armor is generally less protected than that of Drone Armor.

The armor of the Kantus consist of a large and reinforced leather collar. The collar is connected by a metal belt and the chest area contains two iron rings of unknown purposes.

The chest armor is than connected to four, large, leather straps or 'capes' used primarily for cosmetic and cultural purposes rather than for protection. The Kantus goes bare feet and do not have any prominent arm guards other than loosely woven leather straps.

The Spiked Armor is a heavily built and complex metallic armor system built exclusively for the elite Armored Kantus. Unlike the lightly built Kantus, the Armored Kantus is dressed head to toe in extremely durable armor that could function as a weapon.[6]

These armor got their name due to their razor-sharp chainmail, which could stand up and be erected almost instinctively when a Armored Kantus is prepared to 'roll'. Not only was the chainmail 'spiked', but the leg guards were also bladed as well. As such, when a Armored Kantus 'rolls' or 'dives' towards a target, his armor acts as lethal makeshift weapon that could dismember, crush and rip apart a standard Gear.[7]

Moreover, the armor was made from an unknown metallic composite, making it incredibly thick and reflective. Capable of deflecting small arms fire with ease, making the Armored Kantus impervious to all but heavy weapons.

Only precision weapons like Torque Bows and Longshots could pop the armored helmet of the Kantus and only the One-Shot and Hammer of Dawn is powerful enough to bypass the armor.[8]

Due to the sheer complexity and resource needed to craft such an armor piece. Spiked Armors were incredibly expensive for the Horde and only a limited amount was made for the most esteemed of the priesthood.

The large and cumbersome Boomer Armor is an armor set piece meant only for Boomers due to their large size. Unlike Drone Armor, Boomer Armor is made primarily of thick metal plates rather than the more common and flexible leather pieces.[9]

The chest piece of the Boomer Armor is connected via two elongated circles like those of the COG's Trooper Armor, suggesting that the Locust got the designs from the COG during the Pendulum Wars. The chest piece left the belly exposed, but the thick hide and fat of a Boomer made such exposure irrelevant. The back of the chest piece had a lock system which allow specialized Boomers like the Flame Boomer to attach a Imulsion Fuel Tank.

The shoulder pads were relatively small in contrast to the Boomer's size whilst the leg guards was thick and heavy.

All Boomer variants wore the same armor, owing to its versatility and protection, the possible exception being the Savage Boomer which had a protected neck guard and an ammo belt to protect himself from a weapon malfunction of his Diggers.[10]

Butcher wearing a apron overlay of his armor. 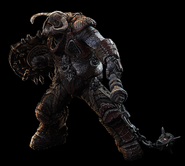 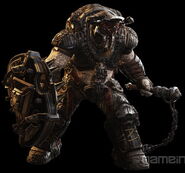 Note the Savage Boomer's modified neck piece on top of his armor.

A stripped down variant of the armor worn by a Tremor.

The Imulsion Injection Harness was a specialized piece of armor equipment invented by Ukkon to significantly strengthen the Locust Horde.

This armor piece is identifiable by the fact that it - as its name implies - injects Imulsion directly into the bloodstream of a locust, making him faster, stronger and tougher, with the added benefit of turning him into a living chemical bomb if he dies.[11]

The Imulsion Injection Harness is a steeled chest piece with Imulsion tanks situated at the back. The armor have multiple tubings to inject Imulsion directly at the arms, legs and chest of the subject. There are two primary sub-variants. The Disciple wears the aforementioned armor whilst the Zealot wore an up-armored design of the Kantus Armor, just in the form of a Imulsion Injection Harness.[12]

After the death of Ukkon, the production of these harnesses and therefore, Disciples and Zealots, ceased operations. Whatever was left of the Imulsion Injection Harness would have been absorbed back into the Horde and reinstated as rare augmentations meant for the Locust elites.[13]

It is unknown why Ukkon decided it was a good idea to inject his troops with a substance that has been known within the Horde for its mutagenic and epidemial affects, which had kickstarted a civil war due to Lambency. A likely theory would be that the Imulsion underwent the Lightmass Process, which would have eliminated the infectious mycelium of Imulsion. 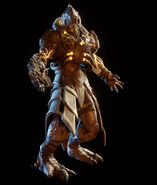 The infamous and iconic Theron Armor was worn by its namesakes. These armor was meant only for the most elite and experience members of the Locust Horde.

Their distinctive and identifiable armored collar proved to be a good psychological weapon against the COG's forces and their presence was known to strike unease in even the most veteran of Gears.[14] The collar and the chest piece was an armored metal piece held together by multiple leather belts.

Unlike the more common Drone Armor, the Theron Armor was covered almost in head to toe, with only the biceps left exposed. Both the arms and leg sections was also covered in this armor and therefore, provides the Therons superior protection in contrast to their inferiors in the Horde.[15]

They are also identifiable via their leather skirt tassels, although these tassels are optional. Theron Armor came in different variants, with the most famous being the one worn by General RAAM.

Cleaver Therons avoid wearing the tassels as it interferes with their weapon of choice.

The onyx black armor of the Theron Elite denotes its feared reputation. 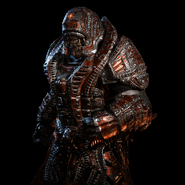 Armor worn by a Theron Sentinel.

The Savage Theron has repainted his armor bone white.

The impressive Royal Armor was worn only by the Palace Guards, the most elite and loyal members of the Locust Horde that was given the honor of defending their Queen.[16]

Although it bares some superficial similarities to the Theron Armor. These gilded armored set pieces was decorated in gold and black and was crafted from high quality materials which provided protection superior to all others save for perhaps, the Spiked Armor of the Armored Kantus.[17]

Outside of the armored gauntlets, the shoulder pads was large and elongated, providing excellent protection from potential headshots. Moreover, the leggings of a Royal Armor is fully covered while even the skirt tassels have been plated in gold.

Due to their impressive craftsmanship and high quality of materials, Royal Armor was incredibly expensive to produce, with only the most esteemed drone being given the privilege to wear one.