Urban
Jacinto is a multiplayer map in Gears of War 2 and Gears of War 3, based on Jacinto Plateau. A King Raven can be seen in the background, possibly for evacuating civilians or transporting Gears. Jacinto is one of the few maps in Gears of War 2 online mulitplayer that has no special computer generated effect. This map is symmetrical and has a Mortar near a King Raven Helicopter and a one way gate, a Longshot/Torque Bow on a ledge near the center, and also has a Boomshot/Hammer of Dawn spawning at the far end of the covered area.

There are many ways to approach this map. At the beginning of the match, most players will make a mad dash for the Longshot/Torque Bow. Instead of going into the heat of battle, go for the Grenades. If you think someone will beat you to them, try to make it to the Boomshot/Hammer of Dawn. Another good weapon to grab is the Boltok Pistol.

This map is ideal for a match of Guardian. When you are the leader, first head and grab the Boltok Pistol closest to you. After that, retreat to the grenade room. Once you grab some grenades, plant them strategically behind barriers leading up to your location. Be aware that the little ledge in the back of the grenade room can be jumped over to leave the area but cannot be jumped over to enter. When hiding here, you don't need to worry about being snuck up on from behind.

When you are not leader of Guardian, just rush the other team until you can get through all of the opposing team's defenses and kill the leader. One good way to quickly and easily dispatch the leader is to get the Longshot Sniper Rifle. Sometimes you can catch the other leader wandering out of cover and get a good, clean shot at their head, even though they think they are safe in their room. Alternatively, there are many good Hammer of Dawn placements with the potential to kill a careless leader on the grenade room promenade.

However, be aware that any tactic you use can and often will be replicated by an opponent, so keep in mind that the inside corner of the grenade room facing towards the Longshot spawn is the only reliable 'safe area' where one can camp and avoid the Longshot, the Mortar, and the Hammer of Dawn, when fired from the opposing balcony. Even then, one should not rely on this area too much as a sniper can simply walk down to the Hammer of Dawn spawn and get a clear shot at a leader camping in this area. It is, therefore, much safer to keep constantly on the move when you are the leader, switching between the stairs next to the statue and the safe area as much as possible.

A good tactic in Horde mode is to get to the grenade rooms and just wait out the Locust. Whenever you get a lull in the waves, usually when there's a Wretch as the last thing left, pick up ammo near the Sniper/Torque Bow and the Boomshot/HoD spawn. On higher waves, you can use Boomshields to block off the stairs as well as set frags on the stairs near the spawn.

If in Gears of War 3, buy the command post that is next to the crate near the Bolo Grenades/Ink Grenades and buy the 2 small barriers that will cost $500 or the one behind the grenades which is $1000 (large).

Jacinto is part of the DLC Forces of Nature. There are different changes to this map from the one in Gears of War 2. For instance, the grenade room no longer has a blockage for the back pathway, so enemies can come up from behind you. There is also a passage underneath the grenade room leading straight to the Boomshot/HoD spawn and finally there are two balconies leading to the Mortar directly from spawn. New weapon spawns include: a Digger instead of a Longshot, and an Ink/Incendiary grenade spawn in the room across the Digger/Torque Bow spawn.

To get the Imulsion Cleaver, you must play Horde and Horde only, so start a match of Horde on Jacinto and to get it you must shoot the four gutters up high that are always above an Imulsion puddle in the "Imulsion" spawn. They are always up high, so if you spawn in the "Imulsion" spawn, it should be above your head. If you didn't spawn in the "Imulsion" spawn, sprint all the way over there and it should be in the very back of the spawn and up high on the building nearest to the spawn. It's a little bit lighter colored than the other ones, as it's stated before they're always above Imulsion puddles. Shoot this and it should drop down and pour water on the Imulsion puddle. The second is in the entrance to the tunnel that goes beneath the Grenade spawn. Once you get to the entrance, turn around and look up. There should be a small gutter on the building to the right in the shadows. The piece you must shoot is about half-way so just spray and pray all the way down the gutter. If you hit the right spot, it will drop down and pour water. The third is on the balcony to the left of the spawn. Once you get up the stairs, look directly above and shoot the lightly colored piece until it drops down and pours water. The fourth and final one is near the Grenade Spawns in the tower. Walk up the stairs and a little to the left. If you look around, you should see a small window looking into an enclosed area inside the building with a dead stalk. Inside that, the gutter is directly above the window and the Imulsion puddle. Shoot this, then head over to the Boomshot/Hammer of Dawn spawn. Once over there and inside the little canopy, look directly out and up a little. You should see a big metal box on top of the balcony. Shoot in this until it comes out and pours water all over the little rock in the Imulsion. You can then see the Cleaver in the rock and now to get it, you must grab the Hammer of Dawn (Note: in order to get the Hammer of Dawn you must begin wave 2) and lase the Imulsion in front of the Cleaver. Keep lasing it until rocks start to form and make a bridge. Sometimes this can take awhile to work. After making the bridge, head on over to the Cleaver and buy it for $900.

Behind the scenes[edit | edit source]

Jacinto in Gears Of War 2 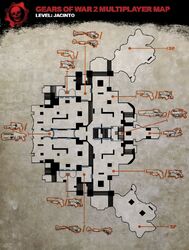 Layout in Gears of War 2
Add a photo to this gallery
Retrieved from "https://gearsofwar.fandom.com/wiki/Jacinto_(map)?oldid=134731"
Community content is available under CC-BY-SA unless otherwise noted.