Locust Horde
The Hydra was a mutated species of Reaver. It was the personal mount of Locust High Priest Skorge[1] and a creation of the Locust scientist Ukkon.[2]

During the war, Hydras were created by the Locust Scientist Ukkon by mutating Reavers.[2]

When confronted by Sergeant Gabriel Diaz and his forces, Ukkon revealed his newest creation, the Hydra and used it to attack them. However, they were able to slay the creature and kill Ukkon.[2]

After the defeat of the Locust Horde during the Lightmass Offensive, one Hydra along with its rider escaped the destruction of the Outer Hollows.[3]

After the defeat of the Locust Horde, Skorge, the High Priest of the Kantus monks, used the awakened Riftworm to destroy Sera's cities on the surface. On his personal Hydra, Skorge led the Riftworm to Tollen and Montevado, destroying the cities.[1] During Operation: Hollow Storm, Skorge, atop his Hydra, led the Riftworm to Ilima, sinking it too and it was first seen by Delta Squad before it led the Riftworm to Ilima. After the death of the Riftworm and the attack on the Queen’s palace, Skorge dueled against Dominic Santiago and Marcus Fenix, however his staff was broken and he was forced to retreat atop his Hydra. Skorge attacked the retreating Gears, following Delta-One, who were on Reavers, to the surface. The Hydra tried to bite the Reavers and Skorge tried to shoot them with a Troika until they got stuck in a small exit, though they eventually managed to get out and continue their pursuit. The Hydra and Skorge chased Delta until Delta used the Reavers' machine guns and rocket launchers to destroy the Hydra, severing its claws and blowing up its mouth, which caused Skorge to crash to the ground, killing him.[1] 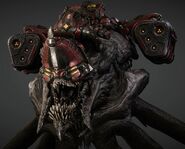 The Hydra about to fly away from the Lightmass Bomb destruction.

Skorge and his Hydra mount chase after Delta Squad.