Gunners was a specialized type of Locust Drone that are expert users of the Troika Heavy Machine Gun. They are encountered manning Troika turrets in camps and settlements.

Many Locust Drones were seen manning Chain Guns and Troikas during the Destruction of Halvo Bay. However, they lacked the adequate equipment, like helmets, to man those turrets. These Locust could be considered precursors to the modern day Gunners, as the Locust began taking over entire cities and scavenging any equipment they encountered. It is probable that a new Drone class was trained to only man turrets on the battlefield, which became known as Gunners.

"I'm pushin' you over, grubs!"
—Michael Barrick, after taking down two Gunners with a Mechanical Loader

At least three Gunners took part in the assault of Ilima city, when Zeta-Six, in their search for Seeders, tried to pass through an alley full of Locust. A Gunner took guard on the right corner of the alley. To pass through the streets, the Gears divided and a team took the roofs and another one attempted to flank the Locust. The Gunner died in the ensuing battle, being flanked from the roofs and being killed easily. When Zeta-Six tried to reach Dr. Wisen's Orphanage, they found a Mechanical Loader and used it to clear their path. Unfortunately, two Troikas manned by Gunners took guard at the other side of the construction yard Zeta was in. Michael Barrick improvised and made use of a metal piece as a shield that the Loader could carry to protect the rest of the squad and easily passed to the other side with little damage to the Loader. As Barrick reached the last gate, he pushed to open it, sending a big metal box nearby into the air which destroyed the Troikas and their Gunners instantly. 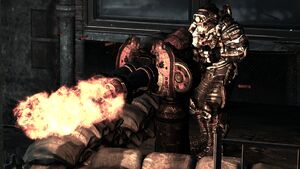 Gunners took part during the early stages of the Lightmass Offensive, with several Troika emplacements located throughout the streets of Ephyra. Delta Squad first came in contact with a Troika emplacement after checking the bodies of some dead Gears, which they thought belonged to members of Alpha Squad. Sgt. Marcus Fenix managed to flank the Troika nest and took out both its Gunner and its Spotter. Delta encountered more Troikas on their way towards the House of Sovereigns and inside the building itself.

After regrouping with the surviving members of Alpha, Delta headed towards Franklin's Outpost so that they could borrow a vehicle to reach the Lethia Imulsion Facility. Several Troika nests attempted to stop them from reaching the Stranded outpost and Chap's Gas Station once darkness covered Ephyra and Kryll soon covered the skies, though the members of Delta managed to overcome them.

At the East Barricade Academy, more Gunners and Spotters attempted to stop the Gears from reaching Fenix's Estate but failed to destroy them and were eventually slain. Delta faced more Troika nests while they attempted to return power to the Timgad Bridge and killed all of their Gunners.

Several Gunners took guard inside the city of Landown when the COG launched a massive attack inside the city. Delta Squad came across a Troika outpost while dealing with some Nemacyst covering their airspace. They managed to take down the creatures and overcome the Gunner but shortly after, another one attacked them from their left flank and pinned them down. Delta asked for air support but Centaur Four-Nine came in and took out the Troika position, saving Delta.

While battling their way through the Hollows, the members of Delta had to face several Troika emplacements throughout the area, most notably the Locust Staging Grounds and the Locust Forward base. However, the Gears made use of several Rock Worms for cover against the Troika's firepower and managed to destroy several Locust outposts on their search for a Riftworm.

As Delta headed towards Mount Kadar so they could locate the Locust's stronghold, several Troika outposts attacked their Centaur tank but failed to destroy it. When Marcus Fenix and Dominic Santiago returned to the Hollows so they could activate JACK's targeting beacon and lead more Gears into the Hollow, Gunners patrolled the surrounding waters inside Locust Gunboats and the prisoner camps while Dom searched for his lost wife Maria. More would protect Nexus from both the Locust and the Lambent but failed to overcome their attackers.

During the Siege of Jacinto, at least one Gunner managed to establish a Troika emplacement outside of the Archives Building and confronted Marcus and Dom but failed to stop them. Several Troika outposts attempted to stop Delta's hijacked Brumak but fell to the creature's machine guns and rockets.

"Those shells are gonna be pretty unstable by now."
"Yeah, let's send them a wake up call."
—Marcus Fenix and Jace Stratton after they see two carts of unstable shells in front of the Troikas at Endeavour

Delta Squad re-encountered Gunners at Endeavour Naval Shipyard where they crushed one at the entrance with their Packhorse. Another one, manning a Chain Gun instead of a Troika, ambushed the Gears just as they entered a docking area while they searched for fuel for the CNV Adamant. The Gears were able to take it down with a headshot. Two more ambushed them while they searched for a rotor to repair their submarine, but the Gears used two carts full of unstable artillery shells to destroy them. It is presumed that every single Drone variant perished after the activation of the Imulsion Countermeasure Weapon.

Gunners wear scuba-like helmets that protect them from a variety of shots, able to stand up to three Longshot shots on Insane. They are usually found in Locust bases, protecting a camp, and not on an open battlefield due to difficulty in Troika transport. Thus, they are mostly found in levels in the Hollow or Nexus. Alone, they pose a low to medium threat. However, when supported by other Locust, they can be deadly by which they force you into cover while flanked by Drones. They often come with a Spotter, who will alert the Gunner to a COG presence. If the Spotter is killed, the Gunner will no longer constantly fire its Troika as it will not know where you are. Instead, there will be a one-to-two second wait before they fire at you, which can be used to fire first. Gunners wield a Hammerburst Assault Rifle in Gears 1, and the Hammerburst II in Gears 2, and behave like an ordinary Drone if forced to abandon their Troika. The best way to get them to do this is to flank them and make them aware of your presence, e.g. by firing at them. Gunners are the only enemies which take more headshots than body shots with a Longshot Sniper Rifle in Gears 1. However, this is negated in Casual by Perfect Reload headshot with the Longshot. Due to the slow firing rate of the Longshot, a Boltok may be a better option at mid-close range. A good way to take them down while they are on the Troika is by throwing a Frag Grenade or Ink Grenade at them while manning the Troika. They will often be unable to move quick enough to avoid damage, and could be killed in one hit if accurately thrown. However, making the throw could be difficult if they spot you and fire. Another easier tactic is to use an explosive weapon, such as the Boomshot Grenade Launcher or Torque Bow, and aim at his less protected body by the stalk of the Troika. After killing the Gunner, it would be advised to man the Troika yourself if flanked from behind, or in need of heavy firepower to kill heavier enemies.