This article is a Stub and needs your help. Please improve it by adding more information.
This article is for the grenadiers of the Swarm. For the Locust Grenadiers, see Grenadier.

Swarm
Grenadiers were the most boisterous and aggressive Swarm Drones who specialized in close quarters combat. Identified by the chalky white war paint adorning their chest and shoulder,[1] they typically used Gnasher Shotguns and Bolo Grenades to flush enemies out of cover.

Grenadiers are essentially the same as standard Drones, possessing the same amount of health, but their weapons make them a different threat. Like their Locust counterparts, they function as shock troops.

They'll stand up out of cover once they start twirling their grenade, so take them out before they can throw it.

On a whole, they are much more aggressive than the standard drone, with them mostly charging towards the player in order to gib them with the Gnasher Shotgun, even when under heavy fire. This can be both an advantage and a disadvantage; although they will charge towards the player making them an easy target, they will strafe and take cover from time to time in order to flank and flush the target out of cover. 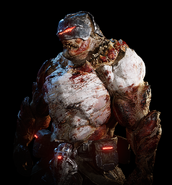