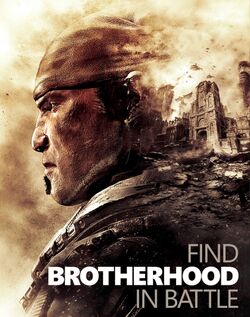 Gearspedia is a collaborative encyclopedia that aims to create the best resource for the Gears of War series of games, and the universe they take place in. We are currently editing over 2,922 articles.

The Dropshot is a new weapon in Gears of War 4. It is a modified mining tool that fires an aerial mine/drill bit which floats in a straight line over the battlefield for as long as the trigger is pressed. Once released, the mine will spin downwards violently, detonating after it hits the ground. If a direct hit on an enemy is achieved, the mine will drill into their head, decapitating them and causing their body to convulse until the mine detonates.

Retrieved from "https://gearsofwar.fandom.com/wiki/Gears_of_War_Wiki?oldid=157087"
Community content is available under CC-BY-SA unless otherwise noted.