Edit
watch 01:19
'Official Gears of War: Judgment' Launch Trailer
Do you like this video?
Play Sound

Gears of War: Judgment is the fourth game in the Gears of War franchise. A prequel in nature, it's also the first Gears of War game without Marcus Fenix and Dominic Santiago as the lead roles. The campaign takes the player back to the immediate aftermath of Emergence Day and revolves around the trial of Kilo Squad, including Lt. Damon Baird and Pvt. Augustus Cole, as they are accused of treason after a battle against the Locust in Halvo Bay.[4] The game is written by Tom Bissell and Rob Auten.

A unique aspect of this game is every main character is playable through the campaign, as each of them have their own parts of the story.[5]

Early in the Locust War, Kilo Squad is accused of treason by Col. Ezra Loomis after Lt. Damon Baird leads Pvt. Augustus Cole, Cdt. Sofia Hendrik and Pvt. Garron Paduk in a battle against the Locust in Halvo Bay, during which they steal experimental Coalition of Ordered Governments technology.

Kilo Squad is put on trial for various crimes by Colonel Ezra Loomis and is given the chance to explain their actions:

Following orders, Kilo checks out a convoy in the Old Town part of Halvo Bay only to find it destroyed. Kilo proceeds to battle through Old Town and into the Museum of Military Glory where they encounter the fearsome Locust General Karn and his mount Shibboleth accompanied by hundreds of Locust. Contacting Colonel Loomis, Cadet Sofia Hendrik suggests using a powerful weapon known as the Lightmass Missile to take Karn out, but Loomis is strongly against the idea. Realizing how dangerous Karn is, Kilo decides to use the bomb anyway and travels to the Onyx Guard Academy where they find and protect the missile's targeting beacon, a bot that Lieutenant Damon Baird later names Troy. With Troy in their possession, Kilo travels to the Seahorse Hills to the mansion of Professor Kurt Elliott, creator of the missile in order to get the launch codes needed to fire the missile. Fighting into the mansion, Kilo must defend Troy from repeated waves of Locust as he downloads the launch codes. Once they have the codes, Kilo travels to the island of Onyx Point where the missile itself is, fighting through entrenched Locust forces to reach and arm the missile. Despite orders to the contrary, they arm the missile and head back to the museum to assist another squad where they figure out Karn is planning to lay a trap. Fighting across the rooftops of Old Town, Kilo sends Troy in to guide the missile and despite Loomis' threats to execute them if they go through with their plan, Baird fires the Lightmass Missile at the museum, blowing it up and killing hundreds of Locust, Karn presumably among them. Kilo then defends themselves from a massive Locust attack on their rooftop and once it is over, they are arrested by Loomis for their actions.

In the present, Loomis prepares to execute the squad when the Locust break into the courtroom. Private Garron Paduk, who particularly hates Loomis, saves his life and he flees whilst Kilo fight their way out and to a nearby King Raven. Reaching the King Raven with Loomis, Karn is revealed to have survived the Lightmass Missile and he attacks Kilo and Loomis who manage to kill his mount Shibboleth. Loomis executes Karn and drops the charges against Kilo, but demotes Baird from Lieutenant to Private for his actions.

In the Aftermath campaign, Baird and Cole return to Halvo Bay during Gears of War 3 with Clayton Carmine to find a ship and reinforcements for the assault on Azura. There they encounter Paduk who left the COG with Sofia sometime after the original battle and set up a community in the ruins of Halvo Bay that has both COG and UIR members with no one caring about sides, only survival. He agrees to lead the three to a ship that can take them to Azura. As they make their way through the ruined city to the washed-up Imulsion rig where Paduk's people are located, the squad comes into conflict with the Locust. Finally arriving at the rig, the group find no sign of living humans however it is occupied by packs of Formers, Lambent Humans. Fighting through the Formers, they send off a flare left by the survivors from the roof of the rig and the survivors of Paduk's people, who have moved to another part of the city, send a King Raven to pick them up but they first have to hold off a determined Locust and Lambent assault. Finally, they board the King Raven and Paduk takes them to the flooded part of the city where a tidal wave from the sinking of Jacinto in Gears of War 2 has beached a ship on the roof of a hotel. The squad collects explosives from an armory at a nearby police station and Baird sets the explosives on columns at the hotel while the others cover him. Unfortunately the explosives fail to collapse the hotel and the team must come up with an alternate plan. Making their way into a restaurant in the hotel, Baird opens three gas valves, releasing the gas into the building then detonates the gas with a Frag Grenade while he, Cole, Paduk and Carmine use a zip-line to get off the building. This time the effort is successful and the building collapses, putting the ship back into the water. Having explained their plan to Paduk, Baird asks his old friend to come with them but Paduk refuses and finally reveals Sofia's fate. A group of men, believed to be Gears, kidnapped her, only enforcing Paduk's anger against the COG. Paduk leaves and tells Baird to never see him again if they are to remain friends. Baird, Cole and Carmine set sail for Azura on the ship, joining with Gorasni forces to help Marcus and the others in their assault on the island.

It was announced at E3 2012 that Gears of War: Judgment will feature a new game mode called OverRun. As the COG, you’ll be protecting two sealed Emergence Holes and a Hammer of Dawn beacon. If you successfully defend the Hammer of Dawn, the round will end, blowing the Locust to smithereens. If the Locust reach the Emergence Holes and uncover them however, the COG are ripped to shreds by a flood of Kryll.[6]

Epic have also revealed another new Multiplayer Mode called Free-for-all. It is now the second mode to be confirmed along with OverRun.[10] Young Marcus, Young Dom, Anya, Sam, Dizzy, COG Gear and Onyx Guard were also shown to be playable Characters as seen in the Free-For-All Mode Gameplay.[11]

When the retail version of Judgment eventually released Sam, Dizzy and the COG Gear we're not amongst the playable characters for multiplayer as they were only available during the beta.

Quinn DelHoyo confirmed that the Locust will not be playable in Versus Multiplayer. He also announced it will be red and blue COG teams creating heavy criticism from fans due to the removal of the Locust.[12]

OverRun is a mode that will consist of five player teams that alternate between Locust and COG soldiers. Players will be able to play as Medics, Soldiers, Engineers and Scouts.[13][14]

Epic have also revealed a new Multiplayer Mode called Free-for-all. Its the second new multiplayer mode to be announced for Gears of War: Judgment following OverRun, and the free-for-all mode is a first for the Gears of War series and will see players taking on an every-man-for-himself role. Epic also said that Free-For-All mode will for the first time pit COG soldier against COG soldier in what they are billing as a "test of wits and will."[15]

The following maps are confirmed for Gears of War: Judgment:

Fans who pre-ordered Gears of War: Judgment at participating retailers received an exclusive in-game multiplayer weapon at launch, the six-round burst Classic Hammerburst. It is a highly feared and effective weapon and is exclusively unlocked if you pre-ordered the game. Exclusive-order multiplayer character skins are Young Marcus, Young Dom, Anya and Alex Brand.[19]

Judgment was developed simultaneously with the original version of Gears of War 4.[20] 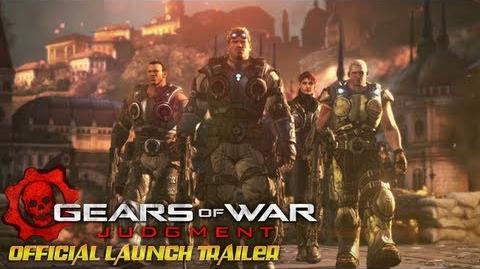 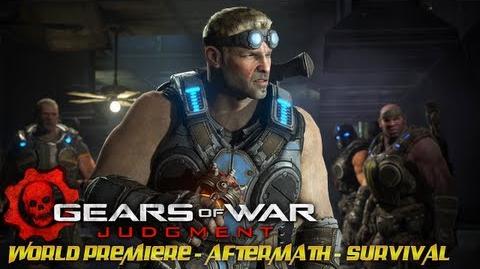 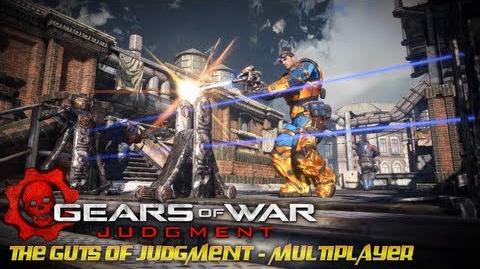 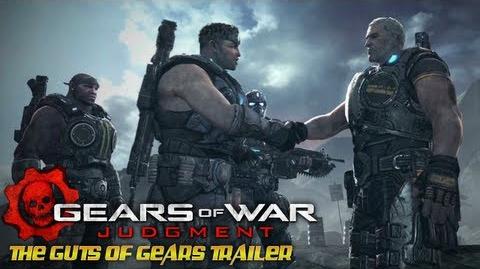 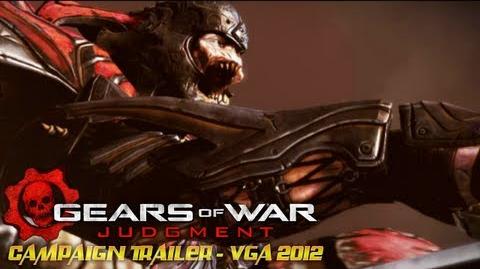 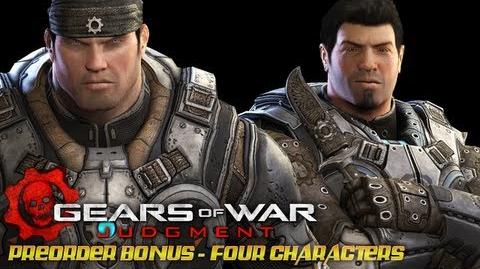 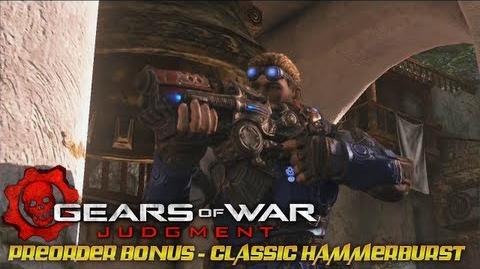 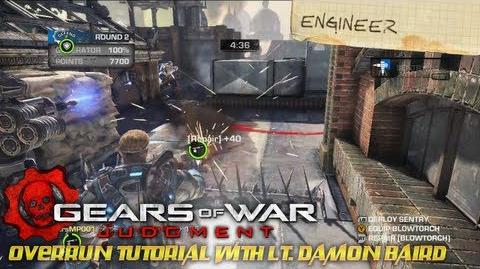 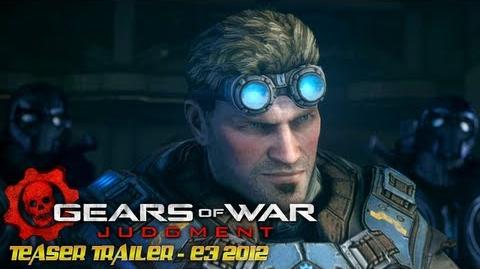