Gears of War Wiki
Register
Don't have an account?
Sign In
Advertisement
in: Characters, Articles to be cleaned up, Stubs,
and 3 more

Gear is the term for the standard infantry of the Coalition of Ordered Governments armed forces. The term comes from the rotating machine which signifies the unity of the COG and the place of the Gear.[10] Gears are highly trained and resilient soldiers, having been in a continuous state of war ever since the Pendulum Wars. As of the Locust War, the Gears are the primary military opposition to the Locust Horde. Gears are organized into squads of four to six soldiers, as opposed to the swarm tactics employed by the Locust. Gears are usually marked by the Crimson Omen emblem. One of the most famous, respected and pre-dominant of all of the Gear unit divisions was the 26th Royal Tyran Infantry. The 26 RTI usually appeared in many forms of media and press conferences and were regarded as one of the most respected unit divisions in the infantry of the COG Army. In the aftermath of the Battle of Aspho Fields and Operation: Leveler, five members were awarded the Embry Star; Marcus Fenix, Dominic Santiago, Victor Hoffman, Carlos Santiago (posthumously) and Helena Stroud (posthumously; Anya Stroud received the award on her mother's behalf).

With the formation of the Coalition of Ordered Governments and its armed forces, Gears were the standard infantry soldier of the COG. After the Pendulum Wars began, the COG sent their Gears to fight on the front lines from the Ostri Front to the Eastern Front in Gorasnaya. The Gears were sent across Sera to fight on various frontlines against UIR to hold territories in hopes of capturing areas where Imulsion was located. They fought a mostly land-based war, with little use of aerial and naval assets. The Pendulum Wars soon entered into a stalemate that would last the majority of the war. The Gears were also used to conquer territories and land for colonization, such as the South Islands.[11]

Some of the most notable battles of the Pendulum Wars had seen trench warfare for the Gears in the Ostri Republic, a small UIR nation. As the Pendulum Wars progressed, the Mk 1 Lancer Assault Rifle was introduced into the COG army and the Indie soldiers of the UIR grew a great disdain for its bayonet.[12] While many fronts of the Pendulum Wars saw heavy casualties, there were “quiet fronts” where both UIR and COG border posts never opened fire on each other for at least ten years.[13] One of the most bloody fronts was the Eastern Front, where the COG lost untold numbers of Gears to the UIR. The survivors were captured and sent to the Ramascu prison camp and faced gruesome war crimes there.[14] Gears at the Learan Prison repaid the favor with their own atrocities against the UIR prisoners of war.[15]

By 17 B.E., the main focal point of the war was in the Eastern Central Massif where Kaskhur and Furlin were located. Kashkur was a COG aligned nation that contained 1/5th of Sera’s Imulsion reservoirs. On the other hand, was Furlin, a UIR nation that had neutral Vasgar in between them both. After Vasgar's economy collapsed, Furlin troops invaded and attacked Kashkur. Gears stationed both in Anvil Gate and Shavad defended their positions against the UIR advance. 6th Brigade defended the frontlines in Shavad while the 26th RTI defended Anvil Gate and its pass.

Gears like Captain. Adam Fenix and Lt. Victor Hoffman were able to accomplish their duties during the UIR invasion of Kashkur. Adam Fenix was able to take out a sniper position in the heart of Shavad city and, after the retreat to the main battle group, he held the lines at Ragani city, losing only ten Gears and stopping a UIR armored convoy. Victor Hoffman and his Gears, along with Pesanga riflemen, killed over two hundred Indie soldiers and held Anvil Gate and the southern pass into the heart of Kashkur. After the Kashkur invasion ended, Adam Fenix would retire and enter civilian life to research the Hammer of Dawn, and Victor Hoffman would break the mold of the COG army and start using commando tactics to win battles instead of large amounts of soldiers and tanks.

On the Sarfuth border, newly promoted Captain Hoffman and a makeshift commando team of Gears and Pesanga rifleman illegally entered Maranday and invaded Lauczi before the UIR could launch an assault on COG held positions in Sarfuth. Hoffman and his commandos destroyed a radio station in Gralia that allowed the COG to send in air support to intercept the UIR forces.[16]

Several weeks after the Pendulum Wars, most Gear units were on leave when the Locust attacked. On the early hours of Emergence Day, rumors spread that the UIR or its holdout states restarted the war. After discovering that a subterranean species called the Locust Horde was behind the attack, the COG mobilized all its units. Many Gears, notably Delta Squad, partook in such notable operations as the Lightmass Offensive and Operation: Hollow Storm, in hopes that it would eradicate the Horde, and finally end the war. The Lightmass Offensive resulted in the death of Locust General RAAM, but not in their defeat so the COG was forced to send a massive army of Gears into the Hollow during Operation: Hollow Storm in an attempt to wipe out the Locust on their home turf as Jacinto was close to falling. The attack succeeded when Marcus Fenix and Delta Squad detonated a Lambent Brumak under Jacinto and sank the city, flooding the Hollow and drowning most of the Locust Horde. While some survived, including the Locust's overall leader Queen Myrrah, the Horde was severely weakened and the Gears were able to hold off small attacks by the Savage Locust until the COG moved to Vectes.

By this time, the COG army was dwindling, most Gears chose to stay on the CNV Sovereign, but some went with Colonel Hoffman to Anvil Gate or other COG settlements. In order to finish both the Locust War and the Lambent Pandemic, Delta Squad gathered together an army of Gears and Gorasni forces to assault the island of Azura where the Imulsion Countermeasure Weapon was located but was also the new Locust stronghold. The combined army managed to retake the island and Delta and Adam Fenix detonated the weapon, wiping out the Lambent and the Locust. The Gears later celebrated the victory outside Pinnacle Tower.

"A military life attracts young people for many reasons - duty, comradeship, purpose, the opportunity to test life to the limits, to learn a trade, escape from home, adventure-even patriotism. But for the youngster lacking a stable caring home, it provides family, with all the security and meaning that goes with it. They crave the structure, approval, attention, and clear rules that their parents should have given them; and we can supply it."
—Col. Gael Barrington
Main article: Propaganda

Gears are equipped with standard COG armor and weapons, i.e.; Lancer Assault Rifle, Gnasher Shotgun and Snub Pistol. This is standard unless a Gear is a designated marksman, in which case they are equipped with the Longshot, and has a specially adapted helmet, or is part of a specific unit with different equipment requirements.

Gears are equipped with a range of protective armor, most notably the heavy bullet-resistant cuirass and the compatible apparatus-equipped helmet that provides protection from inhaled chemicals, blunt trauma, shrapnel, and low-velocity or poorly aimed bullets. However, the helmets offer no protection from a high-velocity Longshot Sniper Rifle round.[17] A rare exception to this is Clayton Carmine who survived a Longshot round (albeit a glancing hit) from a Stranded guard. As well as a variety of other equipment that helps to support them on the battlefield. They also use a wide range of powerful weapons, as said above.

Some Gear squads have access to bot units, but the high level of attrition the bot units have suffered combined with the ongoing Locust War have made replacement components for bot units to be an increasingly-uncommon commodity. Currently, only elite and high-level squads are entrusted with bot units, though many Gear units are alleged to make use of salvaged replacements when available.

Bot units used to be common, even expendable, equipment for Gear squads. Colonel Hoffman once stated, "I can remember when these things came by the crate load." All bot units have a name, such as Frank, Bruce, or Jack, Delta Squad's bot.[7]

After the Sinking of Jacinto, the Stranded Insurgency, and during the Lambent Pandemic, Gear supplies were at an all-time low. Most Gears scavenged what armor and weapons they could. Gears would often appear in mismatched or crudely repaired armor with random helmets, some following Delta Squad's routine and choosing to take the risk and go without one. Prime examples of both of these things being Dizzy Wallin and Bernadette Mataki's armor.

During the Interwar Period, new armor and equipment was developed for the Gears although the veterans of the Locust War tended to maintain a large amount of their old equipment. First Minister Mina Jinn took control of Damon Baird's DeeBee robots and began equipping them for use as a military and police force, with Gears of the newly reformed COG acting as the DeeBees' commanding officers. Many Gears were upset by this turn of events, and when coupled with the Settlement 2 Massacre resulted in a large number of Gears, including Sgt. Marcus Fenix, abandoning the COG and joining the Outsider Movement.

When the Swarm revealed itself and began another war of extermination, First Minister Mina Jinn wanted to use the Deebees to fight the Swarm while the COG citizens and Outsiders were brought to New Ephyra. Unfortunately, the Pouncer and and Swarm FLock's abilities to hijack Deebees coupled with the Swarm's aggression and the reincarnation of Reyna Diaz as the Swarm Queen have resulted in many Gears, both Interwar rookies and Locust War veterans, to rejoin the fighting to protect their homes.

Relationship with the Stranded[]

After the orbital bombardment of Sera, there were millions of humans left to fend for themselves. The now-dubbed "Stranded" generally view the COG and the Gears as fascist for sacrificing them to the Locust onslaught and exchanging freedom for security. However, not all Stranded have the same viewpoint on the COG. Some have enlisted in Operation Lifeboat but find life in the military difficult, either due to being low-rank soldiers or being distanced from family. While the COG views the Stranded and their "independent" lifestyle as treason and will do anything to deny the Stranded supplies and force them one step closer to joining the COG's ranks,[18][19] in some instances Stranded have joined sides with the Gears for mutual benefaction.[20][21] Some Stranded are just as hostile as the Locust Horde, however.[22][23]

Gears often have a large, muscular physique and build, due to years and even decades of hardened combat.[24] 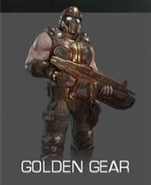 Female COG armor used during the Pendulum Wars and E-Day.

Male COG armor used during the Pendulum Wars and E-Day.