Gears of War Wiki
Register
Don't have an account?
Sign In
Advertisement
in: Weapons, Weapons of the Union of Independent Republics, Gears of War: Judgment weapons

"So this is the UIR sniper rifle..."
"This isn't a gun. It's a comrade."
—Damon Baird and Garron Paduk upon finding a discarded Markza

The GZ18 Markza Sniper Rifle[1] was a semi-automatic rifle manufactured and used by the Union of Independent Republics and, after Emergence Day, the Coalition of Ordered Governments.

After Emergence Day, the Locust Horde captured many Markza rifles and re-purposed large numbers of them after the Fall of Gorasnaya to create the Breechshot rifle. They re-chambered it for larger-caliber rounds, replaced the magazine, stripped out the gas system that made it a bolt-action, and added a blade to the pommel in exchange for losing its scope.[2]

The execution of this weapon consists of holding the rifle by its barrel and using it like a golf club, hitting the downed enemy in the abdomen, sending him flying into the air, while also shattering the victim's ribs. 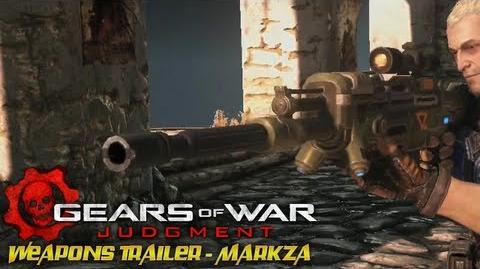