Flame Drones were variants of Drones that only appeared six weeks after Emergence Day. Flame Drones carried fuel tanks on their backs attached to a Scorcher Flamethrower, similar to that of Flame Grenadiers and Flame Boomers.

Flame Drones were encountered inside the Museum of Military Glory attacking Kilo Squad as the Gears tried to defend the Nassar Embry armor display.[1] They were later encountered again breeching the Courthouse and attacking the Onyx Guards inside.[2]

While they did carry a Scorcher Flamethrower and back-mounted fuel tanks similar to the Flame Grenadier and the Flame Boomer, they did not wear the same helmet as them. Instead, they wore standard Drone helmet variations. They also had less health then a Flame Grenadier, having the same health as a regular Drone. 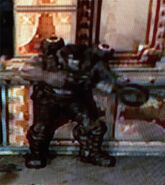 A view of the drone.

The drone shootings its Scorcher.