Gears of War Wiki
Register
Don't have an account?
Sign In
Advertisement
in: Females, Characters, COG,
and 2 more

For other uses, see Carmine.

"Control, need backup! A Snatcher thing's about to -- ! Ah, fuck it! Never mind, Control. I took care of it. DeeBees! We gotta secure this street!"
—Lizzie Carmine, before and after ramming a Snatcher with her Minotaur to save a civilian

Corporal Elizabeth "Lizzie" Carmine was a member of the Carmine Family and the niece of Clayton Carmine. She served in the Coalition of Ordered Governments Army and Engineering Corps during the Interwar Period and the Swarm Invasion as a Minotaur driver in the motor pool and was also a capable Gear.

Elizabeth Carmine was born in New Ephyra to one of the last surviving members of the Carmine Family. She was raised in an era of peace, and was brought up on stories of the heroism of her uncle, Chief Sergeant Clayton Carmine, who served as a war-hero during the Locust War.

When Elizabeth became an adult, she joined the Coalition of Ordered Governments Army, following in the footsteps of her legendary Uncle Clayton. She became an experienced Gear and driver, serving in the Motor Pool of the Coalition of Ordered Governments Engineering Corps as a Minotaur driver. In her time serving as a Gear, protecting COG citizens, she rose to the rank of Corporal and became one of the best drivers in the entirety of the COG army.

Either during her training or service, she met and became friends with Lt. James Dominic Fenix, son of Sgt. Marcus Fenix and First Minister Anya Stroud, who served with her uncles during the Locust War, as well as Lt. Delmont Walker. She also became familiar with Coalition Thrashball League President and former Gear, Augustus Cole. She gained admiration within the Coalition as being one of the best drivers, but also being very arrogant.

"She's the best driver we got. Problem is, shit, she knows it."
—Augustus Cole commenting on Lizzie Carmine's skill

During the Evacuation of Settlement 2 in 42 A.E., Lizzie was assigned to lead the Minotaur convoy sent to evacuate the residents of Settlement 2 as a precaution in light of news that the nearby Locust burial site may have become an active Swarm Hive. The Swarm's presence was confirmed when they commenced an attack on the city. During the evacuation, Lizzie repeatedly went out of her way to aid the civilians, such as by ramming her Minotaur into a Snatcher preying on civilians on the street, and come to the assistance of her fellow Gears, specifically Delta-One.[1]

After Delta-One destroyed a Swarmak in front of The Palace Theater, Lt. James Dominic Fenix issued a request for pickup over the radio and Lizzie immediately obliged despite having already been rerouted six times with a full load of evacuees. Her recklessness, coupled with JD's own proved to be her downfall. After Lizzie's convoy came within sight of Delta-One, a trio of Swarmaks and Drones appeared and knocked a building down in front of their route, then began targeting them.

To prevent the loss of the convoy, JD demanded that Damon S. Baird activate the Hammer of Dawn despite Baird not yet having full control of it. While the resulting Hammer strike successfully vaporized the Swarm creatures, Baird lost his connection and the Hammer continued to fire wildly and move toward the convoy.

One of the Minotaurs was hit, but the civilians in the other two managed to escape. Lizzie tried to exit her Minotaur via the passenger-side door, but ordnance from the Swarm attack struck the door and warped it, preventing it from being opened, trapping her. After seeing to the civilians on Lizzie's Minotaur, JD scrambled to save Lizzie by trying to open the door from the other side, but it refused to budge. Unable to have opened the door in time, the malfunctioning Hammer of Dawn fired on the truck, killing Lizzie in the ensuing explosion and wounding JD.[1]

"Fenix!"
—Lizzie's last words to JD, before being incinerated by the Hammer of Dawn

Lizzie's death had a profound impact on JD. His injuries from the Hammer blast sent him into a coma and when he woke up, his friends noticed that he had become more taciturn and by-the-book COG, especially after having been promoted to captain by First Minister Mina Jinn. Others, such as Kait Diaz, were regretful about Lizzie's loss.[1]

"So this is the Swarm, huh? Not impressed!"
—Lizzie Carmine while battling the Swarm

Lizzie took after her uncle, Clayton Carmine. She was not only skilled at driving and wielding a Lancer, but also courageous, confident, and somewhat reckless. Although her bravery and selflessness saved the lives of a number of civilians at Settlement 2, it also jeopardized her life when she chose to rescue Delta-One rather than withdraw from the city after the evacuation was called off due the ever-increasing Swarm presence.[1] 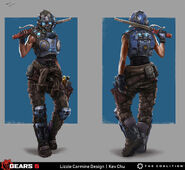