This article is a Stub and needs your help. Please improve it by adding more information.
This article is for the grenadier elites of the Swarm. For the Locust Elite Grenadiers, see Grenadier Elites.

Swarm
The Elite Grenadier is the most experienced and battle hardened of the Grenadiers. They have little patience and only have one goal: to turn their enemies into thousands of chunks.

Armed to the teeth with an Overkill Shotgun and Flashbang grenades, they wear helmets that must be shot off to do headshot damage and a thick armored overcoat for protection.[1]

Elite Grenadiers function essentially the same as standard Grenadier. However, they possess much tougher armor which makes them hard to take down. Moreover, they wore thick helmets which allows them to survive one shot from a Longshot Sniper Rifle.[2]

These Grenadiers also get an upgrade to their weapons; carrying an Overkill Shotgun which makes them lethal at close range. Moreover, they supplement their Bolo Grenades with Flashbangs. While these grenades are nonlethal, when combined with their stun affect and the overkill, the Elite Grenadiers are a force to be reckoned with.[3]

Fortunately, like their lesser brethren, Elite Grenadiers seldom use cover, instead, they slowly walk towards the player, repeatedly using suppressive fire with their weapons to pin their targets, before going in for the kill.

As such, one must dispatch them from afar as quickly as possible before they get too close (usually with precision headshots), or use JACK to either stun or attack them.

A Swarm Elite Grenadier without its helmet 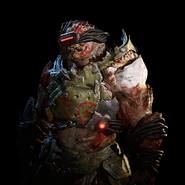