This article is a Stub and needs your help. Please improve it by adding more information.
This article is for the drones of the Swarm. For the Locust Drones, see Drone.

Swarm
Drones are mature Imagos, the result of Juvies that have mutated inside a nest. They are tough and resistant soldiers who resemble the backbone of the Swarm's army. Drones wear clothing and some armor, with their skin hardening into a defensive carapace, giving them some defense in contrast to the Imagos.

They usually use the Hammerburst II, though they use other weapons such as Lancers as well. There are several variations, each for separate purposes.

Drones function the same as their Locust counterparts, acting as frontline infantry against the COG. Like the Imagos, Drones share many of its abilities but have slightly more health and fight more cautiously, in contrast to the more close combat orientated Imagos.

Drones are therefore considered the jack-of-all-trades for the Swarm and are adaptable and flexible in most situations. By themselves they are not a threat, but in groups they are an immediate danger on higher difficulties. 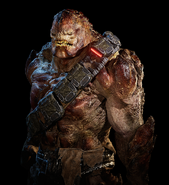