"Del, you in this too?"
"Waist deep."
"You were supposed to keep him out of trouble."
"Now, you know that's not possible."
—Marcus questioning Del about being in trouble with JD

Lieutenant Delmont "Del" Walker was a Gear of the restored Coalition of Ordered Governments in the post-Locust War era. Del was an orphan who befriended JD Fenix at a boarding school in one of the COG's Settlements. When JD ran away to join the militia, Del accompanied him and decided to join as well. A classified incident caused both of them to go AWOL and take refuge among the Outsiders, where they met Kait Diaz.[4]

Del was born in New Ephyra in 20 A.E., but lost both of his parents, becaming a ward of state. Due to his intelligence, he was placed in a boarding school for gifted, or rich children, located in New Ephyra.[5] It was there that he met James Dominic Fenix, son of the legendary Marcus Fenix and First Minister Anya Stroud. Before long, Del was accompanying JD back to the Stroud Estate, and had become a practical member of the Fenix family.[6] Del had many fond memories of the estate, but after the death of JD's mother, a rift was put in between JD and his father.[7]

Del followed JD into the military, and like JD, reached the rank of Lieutenant. They both graduated from Coalition of Ordered Governments Military Academy in 39 A.E.,[2] after which they caught the eye of First Minister Jinn, who selected them both to lead a unit of security DeeBees.[8] However, a classified (and disastrous) incident left the both of them deeply disillusioned with the new COG; wanting to leave,[9] Del convinced JD into going AWOL with him, an action that made them enemies of the state. The pair eventually wound up in Fort Umson, led by Reyna Diaz. Although they were new members, Del was eager, as always, to build bridges between people.[6]

Approximately six months after they left the COG, Del and JD took part in a raid on Settlement 5, a COG settlement under construction, with the objective of stealing a Fabricator for Outsider use. Along with Kait and Kait's uncle, Oscar, the small team survived a Windflare and successfully breached the settlement's perimeter, however shortly afterward ended up with a prolonged skirmish with the settlement's DeeBee security force.[10]

After escaping from Settlement 5 with the help of an unknown benefactor, Del and his squad returned to Fort Umson with the Fabricator, just in time to hold off a heavy assault from the mechanized forces of COG First Minister Jinn. Jinn accused the Outsiders of abducting COG citizens, and soon declares that the Outsiders are starting a war they cannot hope to win. After a violent battle which left large parts of the village in flames, Del and JD attempt to fix the Fabricator which had sustained damage during the battle, with Kait watching guard.

Shortly thereafter, the village is attacked by unknown creatures, with Del, JD and Kait being spared only through the heroic actions of Kait's mother Reyna, who was abducted along with all the other Outsiders. Before her abduction, Reyna was able to remove the hand of her attacker, which was later found and studied by JD, who harvested one of the crystal growths on the strange hand.

Assault on the Stroud Estate

Desperate to get her mother and friends back, Kait pleads for JD and Del to help, and after a short debate between the group, Del suggests that JD knows someone who might have an answer to who abducted the Outsiders. After a short horse ride, the group find themselves at JD's home and endures a tense first meeting with JD's father, Marcus Fenix. Shortly thereafter, COG forces assault the estate, and Del assists in defeating the initial wave of DeeBees before Marcus reveals some family heirlooms; JD and Del's COG armor, his own COG armor, and the armor of JD's mother, Anya Stroud, gifting it to Kait. The group then battles across the estate, enduring many waves of DeeBee assaults and a Windflare before finally escaping on two MULE bikes that Marcus had stored there. During their escape, Del drives one of the bikes, with Kait riding on the back and helping to bring down a Vulture gunship. This leads the COG to seemingly abandon its pursuit of the fugitives.[11]

Having been spurred into action by the strange crystal harvested at Fort Umson, Marcus leads the group towards an abandoned Osmium mine that had been used as a mass grave for the Locust bodies following the events of the Second Battle of Azura, which had encased the Locust bodies in strange, unbreakable crystal cocoons. The mine was located beyond the abandoned Fort Reval, an ancient fortress city that had existed during the Silver Age of Sera, and had been a popular tourist destination before the Locust War where the COG used it as a medical facility. During their investigation, the group is stalked by an unknown creature while encountering strange red pods, within one is the remains of a COG citizen. Soon after, Marcus is abducted by a Snatcher, and before they can rescue him, are attacked in force by the Swarm. Fighting off waves of Juvies, Drones and Pouncers, the group tracks the Snatcher through Fort Reval's stronghold and then through its catacombs, eventually reaching the abandoned osmium mine.[12]

Del and his friends battle their way to a massive ore transporter. Before boarding it, Del speaks to JD, saying that the group has no idea what is at the bottom of the mine or what the Swarm even is. JD said he trusted Del when he chose to leave the COG months earlier, and asks Del to trust him now. Del agrees, boarding the excavator and utilizing it to reach the bottom of the mine, having to employ numerous static defenses from an onboard Fabricator to combat the incoming Swarm. Once at the bottom, Del and the others continue to search for Marcus, who is their only lead to what might be happening. Over the course of the prolonged battle within the mine, it is discovered that the Locust were not actually wiped out by the Imulsion Countermeasure Weapon, instead merely entering a hibernation sleep state and evolving into the Swarm. After many violent encounters with the Swarm, the group finds Marcus' pod and releases him, initially assuming that he was dead before the old soldier gasped back to life. Marcus tells the group that while he was within the pod, he was connected to the Swarm's hive mind, and that while most of the Outsiders were dead, Kait's mother was still alive in another burial site. Kait immediately proposes the group assault the new Swarm nest.[12] Del, JD, Kait and Marcus then escape from the mine on the destroyed transporter's cables. After escaping, Kait angrily lashes out at Marcus when he proposes a detour for backup instead, due to the much larger size of the second site. Refusing to wait, Kait, JD and Del charge off into the night, with Marcus reluctantly following.[13]

Doubling Back for Backup

The group reaches an old COG damn, built before the discovery of Imulsion, which seems to be the only entrance to the new burial site. After several encounters with the Swarm and a Windflare, Del and the team have to make several detours through the dam, engaging the Swarm while Kait and Del repair the dam's subsystems. When the group braves a vicious Swarm assault and a much more severe Windflare, they discover just how massive the second Swarm nest is, and Kait begrudgingly relents to Marcus' plan to call for backup, helping to shunt power to a large communication station in the nearby town of Speyer, which they then proceed to. On the way, they encounter the massive Swarm commander that attacked Fort Umson and had abducted Kait's mother. In the ensuing battle, the group battles a Swarmak, a horribly disfigured variant of the Brumak, and Swarm reinforcements. Finally defeating the massive creature and restraining the Swarm commander, Kait angrily declares to the Swarm's hive mind that she is coming to destroy their entire nest, before brutally executing the Swarm commander with a curb stomp. The group then proceeds on their way to Speyer.[13]

After a brief, mostly peaceful encounter with First Minister Jinn at the outskirts of Speyer, Del and the group fight through both Swarm and DeeBee forces to the communications array, finally securing it and then tasked with using a Fabricator to defend it. After successfully holding off a massive Swarm counterattack, the backup that Marcus had called for arrives in the form of Damon Baird, Augustus Cole and Samantha Byrne, the former members of Delta Squad. During the reunion, Baird reveals that he was the one who originally saved Del, JD, and Kait during the raid on Settlement 5, as he is the CEO and creator of the DeeBees, and that he brought more than just ammunition. Baird reveals two large assault mechs, Jack Jnr. and Second Betty, along with air support from an old King Raven, piloted by his wife Samantha. Soon the group heads out, with Del hopping onboard KR Three-Seven.[14]

Assault on the Tollen Dam

The flight through the dam takes the group through the abandoned city of Tollen, where Del watches from the sky as JD and Kait have little trouble mowing down the Swarm hostiles in the much larger and more powerful mechs. They eventually encounter an immense Swarm creature at the site of the main nest. After an intense fight which leads to the dismemberment of the huge creature, Del, JD, Kait and the former members of Delta Squad regroup at the main entrance to the nest[14]. Soon after entering, Kait's excitement turns to horror as she find her mother Reyna biologically entombed within Swarm biomass with no way of freeing her. Reyna awakens from a trance-like state and tells Kait that if she is freed, she will die, and asks Kait to kill her. Del and the others leave so Kait can farewell her mother.

Afterwards, Kait makes her way out of the nest and tearfully embraces JD. Afterward, Kait shows the assembled soldiers the medallion that her mother had given her; it had belonged to Kait's grandmother, whom Kait had never known. Although on the front side, the medallion was ornate and decorative, on the back side, unbeknownst to the group, the medallion was shaped as the icon of the Locust Horde. Del declares that it is beautiful.[14]

After the events at Tollen, Del and his group now allied with the COG to deal with the Swarm threat and he has been reinstalled back to the ranks.

Some time after rejoining the COG Army, Del, accompanied by Damon Baird, a Jack-bot named Dave and the I.R.I.S. AI went to the COG training grounds located in Ephyra and helped with gathering combat data for DeeBees in order to make them more effective against the Swarm. 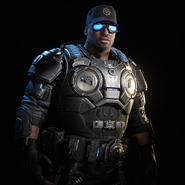 Del after getting his armor back 42 A.E.

Del as an Lieutenant after returning to the COG in 42 A.E.

Del wearing desert armor in 42 A.E.
Add a photo to this gallery

Retrieved from "https://gearsofwar.fandom.com/wiki/Delmont_Walker?oldid=156230"
Community content is available under CC-BY-SA unless otherwise noted.