Gears of War Wiki
Register
Don't have an account?
Sign In
Advertisement
in: Weapons, Weapons of the Coalition of Ordered Governments

"Now nobody spill this shit on yourself. It's like touching the goddamn sun."
—Sid Redburn, warning Alpha Squad on the toxicity of the gas.

The Cytostatic Gas Grenade is a toxic gas grenade manufactured in limited numbers by Gabriel Diaz, Sid Redburn and Mikayla Dorn. Housing Cytostatic Gas - which in itself, is made from two chemicals: fluoracil and RZ50 - these special and unconventional grenades were made specifically to counter the accelerated healing effects of Ukkon in order to kill him. The gas itself was created at the New Hope Research Facility as a failsafe against Ukkon's healing.

These grenades were incredibly toxic, melting flesh in a near instant.[1] According to Mikayla, smelling one of the two compound chemicals that made up Cytostatic Gas was "toxic as fuck". Sid Redburn warned the team not to drop the gas as it was prone to melting skin upon contact.

The grenade itself was housed in a makeshift Stim-Gas Grenade canister, but instead of the blue stimulation gas, it contained the turquoise-green Cytostatic Gas.

After being locked-up in jail for perceived betrayal in letting Ukkon escape, Sid Redburn told Gabriel Diaz and Mikayla about a weapon that could cripple Ukkon and render his healing abilities useless. According to Sid, his time as a security guard at New Hope gave him insight on the medical procedures that eventually led to the creation of the Locust race.[2]

In order to redeem himself from the betrayal, Sid persuaded Diaz to free him and gain the two primary chemicals that creates this gas: fluoracil and RZ50.[3] To find the chemicals, they traveled to an abandoned UIR Chemical Weapons Depot in Vasgar, and then to the Badlands Way Station for the supplies needed for the grenade[4] after which, Diaz located where Ukkon was residing and tracked him to the Zenic Province to end his creations once and for all.[5] During the final battle with Ukkon, Mikayla Dorn threw a grenade at the scientist as soon as Alpha arrived, weakening him and forcing Ukkon's retreat. After the death of his Hydra, Ukkon tried to use his immunity booster to heal himself, but was still suffering from the effects of the grenade which blocked his healing ability while Dorn threatened she had several more grenades if need be. At the end of the confrontation, Ukkon was shot in the head by Reyna Torres and killed since the grenade prevented him from regenerating the damage. 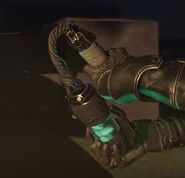 Effects of the gas.