A Crow is a bird that comes from a family of corvids, incredibly intelligent birds that are known to use tools and communicate human speech. The raven is large species of corvids, of which the King Raven got its name.

Crows are natural opportunists and omnivores; combine with their high intelligence, Crows are one of the most widespread and adaptable species of Sera. No surprise that they manage to survive and thrive after the Hammer of Dawn Strikes.

Crows were found throughout the remains of human cities during the Locust War. During the Lightmass Offensive, a group of startled Crows distracted a Berserker from Delta Squad when they were inside a conservatory on their way to the Fenix Estate.[1]

A murder of Crows was also seen flying during the beginning stages of Operation: Hollow Storm, fleeing the entourage of King Ravens.[2]

During their Mission to Mount Kadar Laboratory, Kait Diaz and Delmont Walker startled a murder of Crows that was resting under the trees near the Abandoned Mine.[3] 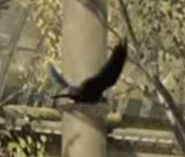 A murder of Crows at Mount Kadar.