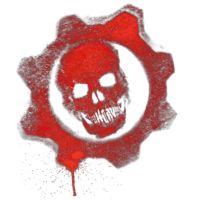 The Crimson Omen is an emblem consisting of a red skull surrounded by a cog. It is part of the official logo of the Gears of War franchise and appears several times in gameplay throughout the series.

In both Gears of War and Gears of War 3, it sometimes appears painted on walls (in the same red) near COG Tags and ammunition supplies that may be beneficial to the player.

In Gears of War 3, the Crimson Omen is available as a weapon skin for the Hammerburst II, Retro Lancer, Lancer, Sawed-Off Shotgun, and Gnasher Shotgun.

In Gears of War: Judgment, Crimson Omens can be found around the environment, usually near the beginning of each mission, and are used to begin Declassified Missions, which, when activated, change the parameters for each mission and subsequently increase the star ranking awarded to players.

Behind the scenes[edit | edit source]

Retrieved from "https://gearsofwar.fandom.com/wiki/Crimson_Omen?oldid=143534"
Community content is available under CC-BY-SA unless otherwise noted.