Edit
watch 02:34
Fire Emblem Warriors: Three Hopes - The Loop
Do you like this video?
Play Sound

The Commando Knife, also called a Fighting Knife, is a type of knife issued to the commandos of the 26 RTI Special Tactics Group.

After the commandos of the 26 RTI Special Tactics Group completed training, they were given these knives as part of a sign of their completion of training and to use in the field. In particular, Private Dominic Santiago was proud to show the knife to his wife as proof of his accomplishment.[1] During the Battle of Aspho Fields, Dom used the knife to cut civilian prisoners free as their Marlin was sinking following an attack by a Khimera.[2]

Despite the dissolution of the 26 RTI Special Tactics Group after the Battle of Aspho Fields, Dominic Santiago continued to carry and use his commando knife throughout the Locust War. During the Evacuation of North Gate; Dom used his commando knife as well as his Lancer when putting down fourteen Drones alongside Marcus Fenix, Victor Hoffman, and Tai Kaliso. After seeing Dom use the knife to kill the Locust, Hoffman commented that Dom still had the commando touch.[3]

In 15 A.E., while driving the beam trawler Thrift back to Vectes Naval Base, Dom got annoyed with Damon Baird's degrading comments about his ability to drive the boat. In response, Dom tapped the commando knife on his thigh and pointed out to Baird that it was proof that while Dom isn't a rocket scientist, he can manage to stumble along and do quite difficult stuff.[4]

In 17 A.E., during the Mission to Mercy, Sergeant Marcus Fenix had trouble opening a jammed lever on an Imulsion pipeline. Without a word, Dom handed Marcus his knife to use as a lever. With the help of the knife, Marcus was able to open the valve and found that Dom had moved on when Marcus turned to return the knife to him. Thinking nothing of it, Marcus hung onto the commando knife to return it to Dom later. Shortly afterwards, Dom sacrificed himself to destroy the Savage Locust and Lambent forces besieging Delta Squad. Marcus never had the chance to return Dom's knife to him, so it remained in Marcus' possession after Dom's death.[5]

At the conclusion of the Battle of Pinnacle Tower, Queen Myrrah, the leader of the Locust Horde, emerged from the remains of her dead Tempest. Marcus ordered the members of Delta Squad to hold their fire, something Queen Myrrah took as act of morality and mercy. As Queen Myrrah taunted him, Marcus got in close to her and stabbed the Locust Queen in the heart with Dom's commando knife, telling her "feel that? That's from Dom and everyone else you killed you bitch!" After Marcus pushed her off the knife, Queen Myrrah died on the roof of Pinnacle Tower in a pool of her own blood. After killing Queen Myrrah, Marcus stared at the knife and Myrrah's blood on it for a moment.[6] 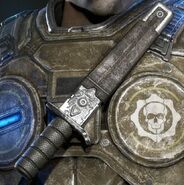