"You know the helmets have a filtering system on them, right? If you wore a helmet, then you wouldn't have to breathe in the dust."
"Uh, yeah... but I wouldn't see snipers so well then, would I?""
—Benjamin Carmine and Dominic Santiago discussing the effectiveness of the helmets

Combat helmets were the standard issue helmets worn by the soldiers of the Coalition of Ordered Governments. Used extensively during both the Pendulum Wars and the Locust War, these helmets were made up of material that was found on Sera, most likely metal or ceramic. Most Gears wore helmets but some did not, opting instead to wear other headgear in accordance with COG policies or none at all.

All COG combat helmets had an internal air filtration system which protected the wearer from dust, ash, and other harmful materials in the air so the wearer wasn't impeded during battle,[1] but these inertial air filtrations systems did have a limit. They could be overtaxed, as shown when helmet filters had to be replaced frequently following the Hammer of Dawn Counterattack, due to the amount of dust and pollutants in the air, or when having to filter large amounts of various poisonous gases, such as Imulsion fumes. In these situations, some variants of the helmets, such as Clayton Carmine's unique variant, had external ports on the sides of the helmet which would allow the wearer to attach an additional external filter to help compensate for the large amount of pollutants so as to not overtax the regular filters.[2]

The helmet was protective, proven by Clayton Carmine's life being saved after a bullet from a Stranded's sniper rifle hit the side of Clay's helmet and was deflected.[3] But they weren't invulnerable; if hit at certain angles, a shot from a Longshot Sniper Rifle could pierce the helmet and kill the wearer.[4]

They reduced the perception of the wearer, especially peripheral vision, making them vulnerable to threats such as snipers. This vulnerability was demonstrated aptly by Anthony Carmine, when he was killed by a Drone sniper.[4]

In the first Gears of War, there are three variants of the standard issued helmet worn in the game by various Gears, like Pvt. Gyules who wears the third variant. The most notable is worn by Anthony Carmine, who wears the first variant.

In Gears of War 2, Benjamin Carmine's helmet, the second variant, is commonly seen on many Gears in cutscenes, while during actual gameplay, the helmets (Variants 1, 2 and 3) are randomly generated on the Gears.

In Gears of War 3, all the previous variants return, however there are two new variations of the COG Combat helmet. The 4th Standard COG Helmet Variant is first seen on various unnamed Gears, dubbed 'redshirts'. It is also shown being worn by the Gears in the RAAM's Shadow DLC campaign. The other helmet variation is Clayton Carmine's unique helmet variant that he alone wears throughout game.

The members of the Onyx Guard wore a helmet that had slits where the wearers mouth should be, and when the user is not eviscerated, the helmet's lights will turn off. 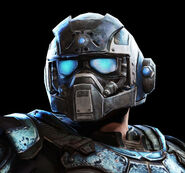 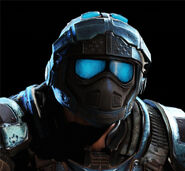 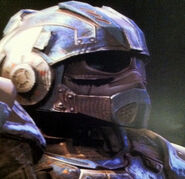 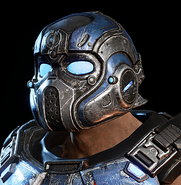 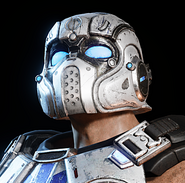 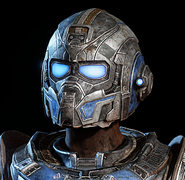 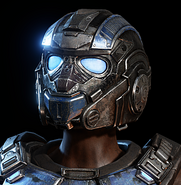 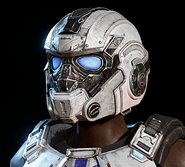 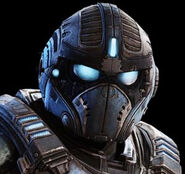 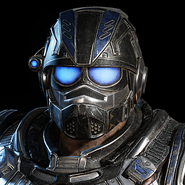 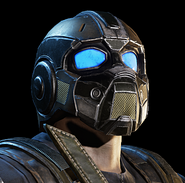 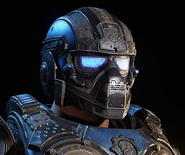 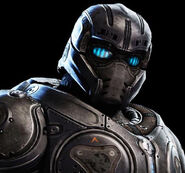 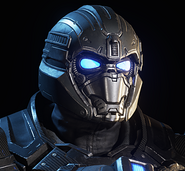 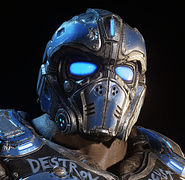 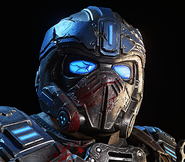 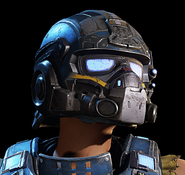 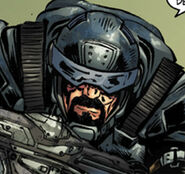 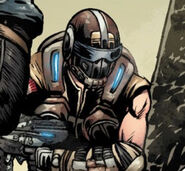 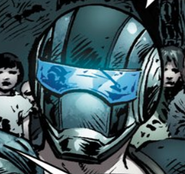