Gears of War Wiki
Register
Don't have an account?
Sign In
Advertisement
in: Weapons, Armor, COG,
and 2 more

Coalition Armor or Plates[1][2][3] were multiple types of body armor that was worn by Gear soldiers of the Coalition of Ordered Governments. A common feature between all the types of armor is that they are made up of a chest plate which is held together by two "seals", which resemble two large circles over the chest area. There are also identification lights that are on certain areas of the armor and power pack.[4]

Cadet Armor is usually worn by newly enlisted Gears. This set lacks the shoulder pads normally found in the more common Trooper variety and is overall more lightweight and flexible.

This is to better accommodate 'Gears-in-Training' so they could get used to working around the much heavier and standard-issue Trooper Armor.

As such, Cadet Armor offers less protection but is much lighter and easier to manufacture.

With the growing lack of resources, the COG used a combination of Cadet, Trooper and Hot Weather Armor to create Custom Armor.

The most common armor in the COG​​ Army is the standard infantry armor, otherwise known as the Trooper Armor.[5] It is a light shade of blue with a black Crimson Omen between the armor seals on the front.

On the back of the suit is a magnetic 'holster' that resembles a general infantry backpack, allowing Gears to carry two weapons on their back. The armor provides medium protection against damage, but will not withstand concentrated or sustained gunfire, especially high-caliber Locust weapons such as the Hammerburst and the Troika. The armor comes with a selection of helmets that come with a built-in filter. While the helmets are standard issue, many Gears chose not to wear them as some feel the optics hinder their field of view or find the helmet a nuisance all together. The torso part of the armor is more heavily armored than the rest of the body, offering decent protection to vital organs but not sacrificing mobility by bogging down the limbs. The armor is so strong and thick that multiple shots from an assault rifle give only bruises to the wearer. Eventually, however, with enough gunfire, the wearer's ribs will begin to break.

During the Interwar Period and the Swarm War, the Trooper Armor underwent some slight modifications such as plated shoulder pads and a slimmer build. But overall, retains the same shape and design.

Female Gears' armor is pretty much a scaled down version of the standard armor.

The leg armor and boots are smaller. The chest plate is also smaller, with a lower cut collar. It has a thinner waist section. The gauntlets are also thinner but longer than the standard male Gear version.

The helmets worn by female Gears are the same as their male counterparts.

Some Gears, due to lack of supplies or personal preference, customize their armor. Many conscripts from Operation Lifeboat have crude, makeshift armor, since supplies go to frontline troops and not support units. However, various Gears, including Tai Kaliso, have made additions to their armor which has been dubbed Hunter Armor to better suit Tai's native cultural clothing on Pahanu.

Some Gears that were left behind during E-Day and the Hammer of Dawn Counterattack, such as Bernadette Mataki, had to do field repairs while on the move to Jacinto Plateau. Other Gears wear mixed and matched pieces of armor from different armor variants.

In the summer, due to the hot climate, Gears would use a different type of armor; a stripped down version of the standard COG armor.

It is sleeveless and uses a less bulky chest piece with thinner leg and foot armor to provide comfort for the Gears in high temperatures. It is slightly weaker than the standard armor due to less protective plating, but is mostly the same. As another consequence, Gears couldn't carry as much ammunition as their standard armor could.

COG combat medics also wore a variant of this armor that was painted white, with two blue asterisks were emblazoned on the front and back of the torso piece. 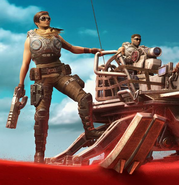 The opposite of Hot Weather Armor, Cold Weather Armor as its name implies, is armor worn over by Gears during missions that takes place on arctic, tundra and sub-zero environments.

The undersuit is thick to ensure proper heat insulation whilst the armor is painted white and grey for better environmental camouflage.

Most importantly, this armor has a inner thermal heater to better warm up the Gear in such extreme weather conditions.[6]

Because of the heating suit plus the thicker clothing, Cold Weather Armor is much more heavier than Trooper Armor and may encumber a Gear on the long term.

Ranger Armor is a lightweight armor worn by scouts of the Coalition of Ordered Governments. As noted by its name, these armor provides the most joint flexibility of any armor, save perhaps, Commando Armor.

Because of the need for scouts to remain hidden while fast, Ranger Armor forego any form of heavy protection as shown from Trooper Armor.

The only form of protection these scouts receive is a bulletproof vest, which may provide some protection from small arms such as pistols and shotguns, but not more powerful caliber rifles.

This does not mean that a scout is unable to gain better protection however, as it is known that Ranger Armor can be upgraded with the chest carapace with neckguard found in the heavier Destroyer armor with additional survival kits.[7] As such, Elite Ranger Armor is sometimes worn by Sappers on the frontline despite having less protection, due to increased pouch belts to store engineering equipment. Gabriel Diaz, was one such example of a Sapper wearing Ranger Armor during his time in the Motor Pool.[8]

Ranger Armor should not be confused with Delta Armor or Commando Armor despite their similiar attributes.

Medic armor are armor pieces worn by COG Medics during the Pendulum Wars and Locust War.

The armor and helmet design was distinct from standard-issue COG armor and bares more resemblence to post-war COG armor. These armor pieces were painted white with a blue medical logo pasted on the frontal breastplate, to signify that the wearer of the armor is a medic from the Coalition of Ordered Governments.

Medic armor is far more stripped down and less bulky than normal COG armor, due to the fact that Medics are meant to primarily heal wounded Gears than fight the enemy head on.

Medic armor comes equiped with medical and military supplies, due to the roles of Medics being front line combat doctors. As such, medic armor prioritise more on stocking up medicinal equipment than ammunition.

Hivebuster Armor is a specialized piece of armor used by the Hivebusters on their suicide mission to destroy a Swarm Hive from the inside out.

These olive green armor is made to be incredibly light and slim. This is to ensure the Hivebuster won't be encumbered by heavier armor pieces and to maximize speed to escape the Hive at the expense of protection.

An interesting component of Hivebuster Armor is the addition of a velcro piece in front of the chest armor. This piece is used to carry the Hivebuster's Venom Bomb, a small chemical weapon of mass destruction that is instrumental in destroying the Hive from the inside.

All Hivebuster also come equipped with a Adrenaline Injector to ensure the Hivebuster stays fully conscious when they are willfully taken and podded by a Snatcher.

Destroyer Armor are heavy-duty armor worn by Gears who operate heavy weaponry such as Mulchers and grenade launchers.

They are also used by Gears such as Sappers due to the presences of demolition charges held around their ammo belts.

These armors are thick and reinforced with a noticeable neck guard and integrated rebars to protect the Gear from explosives and ricocheting shrapnel. Shoulder pads are also thicker with the thigh and leg armor showing increasing armor thickness.[9]

The increase level of protection also means that Destroyer Gears could withstand impacts that would fell normal armor.

While it offers increased protection, Destroyer Armor are also incredibly heavy and cumbersome, slowing the wearer down and tiring him/her out.

Gears who wear this armor must also come equipped with a helmet as their profession requires such protection. Sid Redburn wore Destroyer Armor due to the fact that he was Alpha-Two's primary heavy weapons user.[10]

Delta Armor are used by high ranking Gears on unorthodox terrain and unconventional warfare. They are often dark blue in color.

Usually Gears who wear this armor venture in harsh locations with little logistical support such as ammunition and supplies.

As such, Delta Armor is equipped with more ammo pouches, extra canteens and ammo belts than usual which allows them to carry further consumables in emergency needs.[11]

Gears wearing Delta Armor usually fight in either savannas or jungles and, although they do not provide the same level as protection as Veteran Armor nor as stealthy as Commando Armor, it provides a good balance of both.

A helmet is optional as some wearers of Delta Armor opt for a khaki hat to provide both shade and better visibility at the expense of protection. Delta Armor should not be confused with Scout Armor or Commando Armor despite their similiar attributes.

This armor is most notably worn by Marcus Fenix, Jace Stratton and Victor Hoffman.

It is dark grey, exceptionally bulky, and has a sort of hunchback look. The extra large glowing straps along the shoulders indicate that it may actually be an extra backpack attachment on the standard issue COG armor, thus giving it the bulky, hunchback appearance.

This armor allows a Gear to carry even more equipment and supplies at the cost of increased weight and mobility stress. Due to this, the Veteran Armor is only utilized in extensive campaigns when immediate resupplies are not always guaranteed.

A symbol of the Coalition of Ordered Governments Navy is etched on the breastplate, while the two circular 'seals' are replaced with a more angular seal.

Moreover, Marine armor boasts an ammunition belt and pockets which allows the Marines to hold more ammunition and military equipment than the standard Gear. Furthermore, Marine armor is more streamlined than normal armor, this is to complement the need for a Marine to swim in either emergencies or underwater operations. Due to their naval presence, it is deduced that Marine armor comes equipped with a standard issue oxygen respirator in the helmet, for underwater operations.

Armor worn by Commandos and 26 RTI Special Tactics Group during the Pendulum Wars. Their armor included special chest mounted knives, backpacks, medical kits and anything a Gear needed out in the field.

Commando armor was more stripped down in appearances and the color far more jaded and dulled in contrast to the standard issue armor. This was done for covert operations, in which commando units would try to camouflage themselves and blend into the environments behind enemy lines[12] 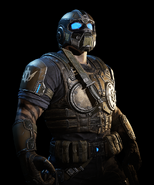 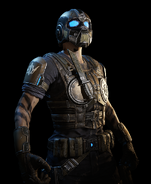 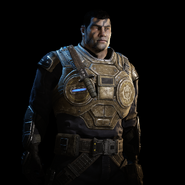 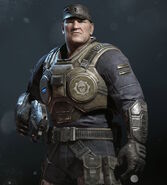 Their armor is completely black (hence its name) with the exception of the glowing eyes of their helmets, a single glowing strip down the center of the chest plate, and two glowing spots on the back shoulder blades.

Onyx Guard armor also covers the wearer completely as apposed to most other COG suits. Also, there appears to be more armor plates, meaning that the Onyx Guard armor far more stronger and durable than the standard COG armor.

As such, Onyx Guard armor is far more expensive to produce due to the higher quality materials needed to make these suits. Known wearers:

Other Pieces of Armor[]