Gears of War Wiki
Register
Don't have an account?
Sign In
Advertisement
in: Stubs, Articles with conjectural titles, Vehicles 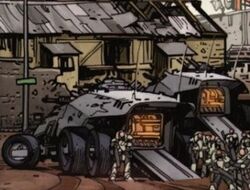 Coalition of Ordered Governments
This APC was used to ferry troops during the Pendulum Wars. Howerd Company used at least two APC's to transport them to Ragani city to stop an advancing Indie column of tanks.[1]

It is believed that these APCs were the predecessor to the Locust War-era Armadillo, due to the similar chassis. However, unlike the Armadillo, this APC has its troop hatch opened from the rear like most modern real-world APCs.

The Union of Independent Republics had their own equivalent of the COG APC in the line of the UIR APC.