Gears of War Wiki
Register
Don't have an account?
Sign In
Advertisement
in: Weapons, Weapons of the Locust Horde, Gears of War: Judgment weapons

"What have they done to my Markza!?"
"A sniper rifle with no scope? Ha! Those grubs are real geniuses!"
—Garron Paduk and Augustus Cole, upon seeing a Breechshot for the first time

The Breechshot is a straight-pull bolt-action rifle that saw action during the early days of the Locust War. It was built around the UIR's GZ18 Markza Sniper Rifle, many of which were captured by the Locust Horde following Emergence Day. The main purpose of the Breechshot was for hunting Brumaks.[1]

The Breechshot is used as a large-caliber infantry rifle, alongside the Hammerburst II, and carried most notably by the Rager. The rifle is fed from an internal, 4 round capacity magazine. When empty, a clip of 4 new rounds are inserted from the top. The rifle is cycled manually by pulling the bolt straight back, ejecting the spent cartridge. A new round is then chambered when the bolt is pushed forward again.

Execution with this weapon involves standing the wounded enemy up, then swinging the gun by the barrel like an axe, slicing the enemy's head off with the bladed pommel. 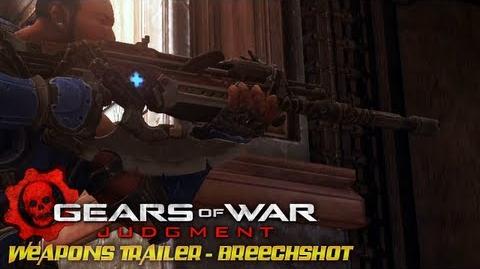