Gears of War Wiki
Register
Don't have an account?
Sign In
Advertisement
in: Weapons, Weapons of the Union of Independent Republics, Gears of War: Judgment weapons

"One of our best weapons. Boosh is Gorasni for boom!"
—Garron Paduk to Kilo Squad as they discover the weapon

The Booshka was a semi-automatic, drum-loaded grenade launcher manufactured by the Union of Independent Republics during the Pendulum Wars. It was also used near the beginning of the Locust War.[2]

Like the GZ18 Markza Sniper Rifle, the Booshka was a UIR-made and used during the Pendulum Wars, possibly manufactured by the Gorasni due to its name. But in the aftermath of E-Day, it was also used by the Coalition of Ordered Governments for a short period of time before fading out of existence.

It's possible that the Locust Horde based their own Boomshots and Digger Launchers off the Booshka, given their similar design and functionality.

The Booshka was a semi-automatic grenade launcher that fired ricocheting, high-explosive projectiles with a delayed fuse, that was fed from a three-round drum. While it wasn't as powerful as the Locust Boomshot, its Imulsion-filled projectiles were still very dangerous to groups of enemies. In addition, the ricocheting capability of the projectiles allowed the user to reach enemies at awkward angles. Grenades fired directly at an enemy will explode on contact.

The Booshka's execution involves lifting the downed enemy up, then using the barrel casing to break his/her neck. 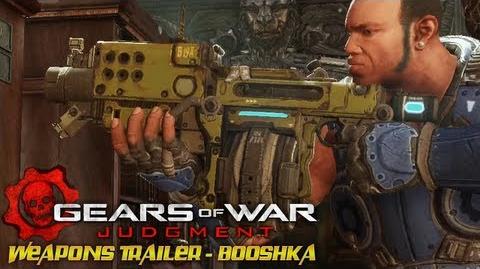