Gears of War Wiki
Register
Don't have an account?
Sign In
Advertisement
in: Weapons, Weapons of the Coalition of Ordered Governments, Weapons of the Union of Independent Republics,
and 7 more 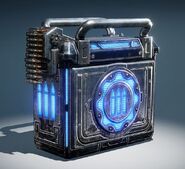 The ammo crates from the Coalition of Ordered Governments are silver metallic boxes with blue highlights. These ammo crates provide ammunition for the majority of the weapons manufactured from the COG. They do not provide ammo for Locust Weapons however.

They are by far the most common and ubiquitous ammo crates found throughout the Gears franchise. They are the only ammo crates that come in various sizes.

The ammo crates from the Union of Independent Republics is a dark olive green box with orange highlights, a stark contrast to their COG counterparts. They provide ammunition to only weapons manufactured by the UIR such as the Markza Mk 1 Marksman Rifle, although for gameplay purposes they also provide some ammunition for COG weapons.

They only appear in the prologue for Gears of War 4 during the Battle of Aspho Fields and are one of the rarer forms of ammo crates. They also appear in some form in Gears 5 in the regions of Vasgar.

Ammo crates from the Locust Horde have two different appearances. In Gears of War 2 and Gears of War 3, they were dark, brown spiked boxes with red highlights, in Gears of War 4 however, they are far more metallic with a different box design.

These ammo crates unsurprisingly, only supply ammunition for Locust weapons. They are fairly uncommon, only appearing in areas settled by Locusts such as the Inner Hollows, Nexus and the Deadlands or at the Locust Burial Grounds where the Swarm has repurposed them for their own use. 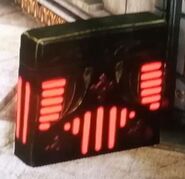 Explosive ammo crates are a new form of ammo crate found in Gears 5. These ammo crates were dark silver in coloration with orange-red highlights and were far larger than normal ammo crates, given the size of the explosive ammunition. They were rounder in shape and came with their own different sizes.

These ammo crates as their name suggests, only supply ammunition from explosive weapons from the COG, UIR or Locust/Swarm. They are found throughout the Gears 5 campaign and were more uncommon than either the COG ammo crates or the Locust ammo crates.

Supply drops were rare ammo crates that only appear in Horde 2.0 in Gears of War 3.

These ammo crates are weapon crates and were identifiable by their green highlights and money icon. They only appear if a player completes a Horde challenge.

These weapon crates are therefore, a gift to the player, supplying them with powerful heavy weapons such as Torque Bows or Boomshots for example. Four of these crates are dropped, one for each Horde participant.

The rarest form of ammo crates, found only in select few maps in the campaign of Gears of War: Judgment, where Horde mode areas are permissible or, even more rarely, out in the open. These crates were dark silver and onyx in color and had yellow highlights. They only come in medium size and only one or two is available in each map area.

As the name suggests, these ammo crates are used exclusively for the elite Onyx Guard from the COG. Due to their name, they were only found in areas that house Onyx Guards such as the Halvo Bay Military Academy.

Whilst smaller than a large COG ammo crate; as these ammo caches served only for the Coalition's best, it is expected that they are able to replenish a large amount of ammunition from all types of weapons as well as an additional grenade refill. 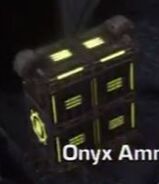 The Normal Prize Box or PrizeBox is a multiplayer only ammo crate available only in Gears of War: Judgment. These boxes are only earnable by completing challenges either in campaign or in multiplayer, specifically, in killing a set amount of enemies. These boxes do not have a physical model, rather they act as the precursor to loot crates found in Gears of War 4.

As such, these boxes are gifts to the player and when opened, has a randomized loot. Players can either gain XP or new weapon/character skins of various rarity. Normal Prize Boxes are silver-grey in color with a light yellow decal to denote the commonality of the loot.

The Epic Prize Box is a more uncommon variety to the standard Prize Box. They are available only in Gears of War: Judgment and could only be obtained by either completing challenges or levelling up in either the campaign or multiplayer.

These boxes have randomized loot like its more common brethren. The Epic Prize Box is identified by its bright red decals and its silver-grey frame. The loot found in the Epic Prize Box are more valuable than the common variety, but not as much as the Legendary variant.

The even more rare Legendary Prize Box is a special sub-class of the Normal Prize Box also appearing only in Gears of War: Judgment. Similar to the more common variety, these boxes are only earnable by completing challenges only in campaign or earning a set amount of ribbons.

The challenges in the campaign are much tougher to accomplish, but their rewards are far higher in quality and rarity. They are grey boxes with purple decals, which highlight the increased rarity of the loot.